For other uses, see Imitater (disambiguation).

Imitaters let you use two of the same plant during a level!

Normal (transforming)
As the imitated plant (after transformation)

Depends on the imitated plant

Beating Adventure Mode, for $30,000
"I remember the Zombie Wars back in '76," says Imitater in a raspy, old-man's voice. "Back then, we didn't have all these fancy peashooters and jalapenos. All we had was guts. Guts and a spoon."
Imitater is a plant in Plants vs. Zombies, Plants vs. Zombies: Journey to the West, and Plants vs. Zombies: Great Wall Edition. His special ability is that he can copy any plant and its abilities, except upgrade plants and itself. He can be used to effectively cut the recharge time of plants in half, although he takes up another seed slot.

The Imitater is one of three last plants obtainable in the game. He costs $30,000 to purchase the seed packet from Crazy Dave's Twiddydinkies, making him the most expensive plant in the game.

After purchasing the Imitater, he appears on the lower right part of the plant selection screen in a new added box on the side when choosing your seeds. Selecting it brings up an overlay, asking which plant it shall imitate for the round. After selecting, he will take up a slot as the imitated plant in a melancholy gray or shaded green (depending on version).

The Imitater, when planted, will appear as himself, but after 3.2 seconds (1.5 seconds in the DS version) he will transform into his copied form, and also has the disadvantage of being defeated while transforming. The copied form costs as much and behaves just like the original plant. On most versions of the original Plants vs. Zombies, the plant will appear monochrome (silver) colored. On the iOS and Android versions, the Imitater version is the same color as the regular plant. Imitated explosives will explode, and an Imitater Tall-nut has the same health as a regular one (but can be jumped over before turning into the imitated Tall-nut, and can be eaten by the zombies at the same rate as eating regular plants).

Note: The Imitater cannot copy upgrade plants such as the Gloom-shroom or the Cob Cannon without hacking. He is also unable to imitate more than one plant at once or himself.

In Plants vs. Zombies, it is recommended to choose the original seed packet as well or to use the original version of the plant before using the Imitater version. There is no clear benefit to having only the Imitater, as it requires time to transform but is otherwise identical to the original plant. Therefore, an Imitater can be eaten, crushed, or smashed by a zombie while transforming, ruining the player's advantage to copy the plant. So planting imitated plants like a Cherry Bomb should be planted further than a normal one from zombies.

The Imitater can be used to effectively half the recharge time for the selected plant, assuming the copied plant was also selected. At the starting of a Survival: Endless level, use the Imitater to imitate a Sunflower to make your sun production faster.

The only disadvantages to the Imitater are that he can only imitate one plant in a level, the time he takes to transform, and that the Imitaters consume one seed packet if one wishes to use him effectively. When placed right in front of zombies, they may eat him before he finishes transforming. This is mainly a problem when using him to imitate explosives which are placed right into the middle of the group of zombies they are intended to destroy. He also creates a problem when trying to use him as a last minute defensive plant, as he takes a regular amount of bites to eat him while he is transforming.

Imitater seed packet in the iOS and Android versions

Imitater before transforming into a Flower Pot

Imitater on a Fume-shroom before transforming into a Coffee Bean

Imitater in the DS and DSiWare versions 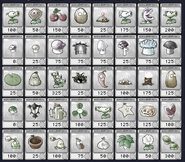 Some Imitaters about to transform into some Lily Pads