Icy Currants between the same line can form ice to freeze zombies.

Icy Currant lives in a sub-30-degree region year-round and often chats with Snow Pea. One day Icy Currant sneezes and said: "It's so cold today!"

Icy Currant (寒冰醋栗: pinyin: Hán bīng cù lì) is a plant in the Chinese version of Plants vs. Zombies 2 introduced in the 2.2.4 update alongside Electric Peashooter and Hot Date. Like Electric Currant, two Icy Currants on the same lane or column will generate an ice wall that slows down zombies. He can attack zombies by creating an ice tile on his tile that slows zombies down to defend himself.

Like Electric Currant, he is based on the currant, more specifically, the white currant.

His name is a combination of the words "icy," referring his ability and appearance and "currant," the real-life plant he based on.

Icy Currant's iceberg armor will explode when it ends, dealing damage to zombies around him.

Use this plant as you would an Electric Currant. Pair him with Sweet Potato or Garlic to make sure all zombies go within range. Keep in mind that he does not have a ranged attack unless you have multiple in the same column or row.

However, Icy Current has a lot of weakness. The aforementioned short-range makes him impractical for damaging and slowing zombies. In addition, there are far better slowing options, such as Snow Pea, Sap-fling, or Cold Snapdragon. 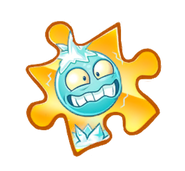 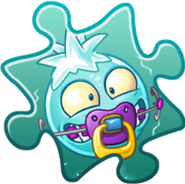 Icy Currant in a gacha slot 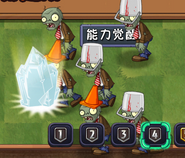 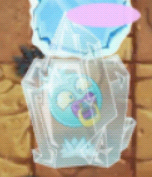 Icy Currant on a Gold Tile

Retrieved from "https://plantsvszombies.fandom.com/wiki/Icy_Currant?oldid=2354643"
Community content is available under CC-BY-SA unless otherwise noted.