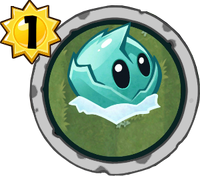 For the version in Plants vs. Zombies 2, see Iceberg Lettuce.

Iceberg Lettuce is a premium uncommon plant trick card in Plants vs. Zombies Heroes and a member of the

Iceberg Lettuce is a handy trick to have, whether you are using a

Freeze deck or just want to shut down a zombie for a short time. Iceberg Lettuce can be played to activate Snowdrop's ability, making it stronger, or Winter Squash's ability, instantly destroying any zombie, including huge threats like Zombot 1000 and Wannabe Hero.

This trick is especially good on Tennis Champ on the turn she is played, as her ability goes to waste due to her being frozen that turn. It is useful at preventing zombies with the

Anti-Hero trait like Mini-Ninja and Smashing Gargantuar to give a plant an extra turn to destroy them while said zombie stays helpless.

While this trick is outclassed by Big Chill due to the aforementioned superpower having the additional ability of drawing a card, Big Chill can only be played once per game and only Green Shadow and Rose can play it, whereas Iceberg Lettuce can be played up to four times and is available to every Smarty hero.

If you are playing as Rose, you can go one step further by also playing Wing-Nut, which will guarantee that zombie to be completely unable to do anything, as Wing-Nut prevents that zombie from even thawing out via bonus attacks.

Do not play it when there is a Cryo-Yeti on the field, as he will get a boost once it freezes a zombie.

While Iceberg Lettuce does not do any damage, it is a cheap trick to

Freeze your zombie, which is annoying, and possibly even dangerous, especially if Snowdrop and/or Winter Squash are on the field when it is played. If that zombie is important to you, thaw it by making it do a bonus attack with cards like Lurch for Lunch. If you don't have any, boost its stats for it to survive the attack. But if you can sacrifice that zombie without ruining your strategy, it is usually better to let it be destroyed. This trick becomes even more dangerous with Rose if she has Wing-Nut on the field, which makes all bonus attack cards useless. In that case, you have to either somehow destroy Wing-Nut or wait until the next turn. If your frozen zombie is going to get destroyed anyway, it may be worth playing Final Mission to do 4 damage.

The best way is to have a Cryo-Yeti on the field, as he will recieve a boost once it freezes a zombie.

Iceberg Lettuce being played (2)
Add a photo to this gallery 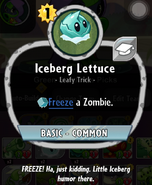 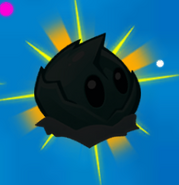 Retrieved from "https://plantsvszombies.fandom.com/wiki/Iceberg_Lettuce_(PvZH)?oldid=2243561"
Community content is available under CC-BY-SA unless otherwise noted.