Ice trail is an environment modifier left behind by a Zomboni which causes the player unable to plant any plants on it. It will disappear after 30 seconds or if the player uses Jalapeno to melt it. Wherever the ice trail appears, a Zombie Bobsled Team may appear on it, with the exceptions of Level 5-10, Dr. Zomboss's Revenge, Invisi-ghoul, Heat Wave and Survival Mode levels.

Ice trails return in the Chinese version of Plants vs. Zombies 2, and are now created by Walrus Zombies.

Be sure to destroy the Zomboni quickly to prevent the trail from getting dangerous. The longer the trail is, the harder it will be to defend the lane due to being unable to plant Spike-weeds to prevent other Zombonis from making the trail last longer. 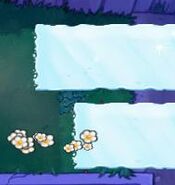 Daises that are on an ice trail

Chinese version of Plants vs. Zombies 2

Retrieved from "https://plantsvszombies.fandom.com/wiki/Ice_trail?oldid=2053270"
Community content is available under CC-BY-SA unless otherwise noted.