For other uses, see Ice Pea (disambiguation).
Not to be confused with Frostbolt Shooter.

Slows down zombies with icy precision

Ice Queen Pea was a VIP plant in the game Plants vs. Zombies Adventures. The player could purchase her after winning Killjoy Park Level 6. She was the stronger version and the VIP version of the Snow Pea.

She is based on Snow Pea and the Snow Queen, the main character of the fairy tale of the same name.

"Spoot!" she says as she launches an ice-pellet. She'd like to be more eloquent, but, she's freezing.

“Spoot!” says Ice Queen Pea as she launches another ice-pellet. It’s not as dignified as she’d like, but them’s the breaks when you’re emitting frozen projectiles.

Like other VIPs, Ice Queen Pea was farmable without needing to buy her, but this exploit was fixed before Plants vs. Zombies Adventures went into open beta.

The player got the Ice Queen Pea 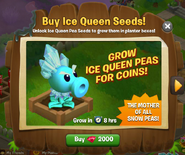 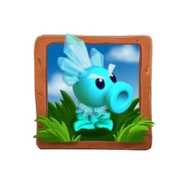 Retrieved from "https://plantsvszombies.fandom.com/wiki/Ice_Queen_Pea?oldid=2175471"
Community content is available under CC-BY-SA unless otherwise noted.