When revealed in an Environment:

Freeze a Plant.
You wouldn't believe how many brains a chunk of space ice goes for on a black market. Let's just say, she's rolling in gray matter.
Ice Pirate is a galactic uncommon zombie card in Plants vs. Zombies Heroes and a member of the

She has the Gravestone trait, and her ability gives the

Freeze effect to a selected plant when she is revealed on a lane with any environment on it. Her closest plant counterpart is Chilly Pepper.

Her description references Grey matter, a major component of the central nervous system which consists of the brain and spinal cord, which in turn is a homage to the zombies' obsession with brains.

Gray matter could also be a play on Dark matter, a form of matter that is thought to account for approximately 85% of the matter in the universe and about a quarter of its total energy density, referring to it being a Galactic Gardens card.

You wouldn't believe how many brains a chunk of space ice goes for on a black market. Let's just say, she's rolling in gray matter.

Ice Pirate is a glass cannon zombie due to her high strength but low health. However, her ability is really useful as she can disable a plant from attacking by freezing it, as well as boosting the Cryo-Yeti. Keep in mind that her ability only activates when she is revealed in an environment. While you don't need to necessarily bring your own, having one is especially handy since not all opponents might bring one, and even then, there are no plant cards that can remove an environment without replacing it with a new one.

Since she comes out from a gravestone, Headstone Carver can boost her to make her slightly stronger into a 4

. You can also use graveyard or any cheap environment avaliable, and even if it would damage her, gravestone zombies are revealed before combat and her ability will activate before she is destroyed. You can also reuse her ability via In-Crypted, Firefighter, Secret Agent for Brain Freeze, but not Mixed-Up Gravedigger as her gravestone may end up in a lane without an environment.

You can also use Pirate synergy cards like Swashbuckler Zombie, who will boost her if she hurts the plant, and Captain Flameface, who can give all pirates strikethrough.

Statwise, Ice Pirate is very easy to destroy due to her low health, as anything that does damage will destroy her. However, her ability can prevent a key plant from attacking that turn. If you see a gravestone that is in an environment, chances are that it can be Ice Pirate inside.

Unless you are certain you can win the game, do not Bounce her, as your opponent can reactivate her ability. Alternatively, you can destroy her with Grave Buster if she has not been revealed yet. If you really need to, use cheap tricks like Banana Bomb or Water Balloons to get rid of her. 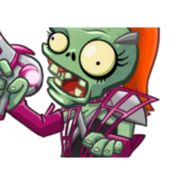 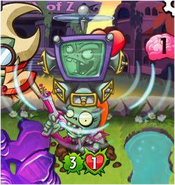 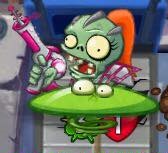 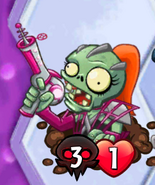 Ice Pirate in the background of the Galactic Gardens battlefield 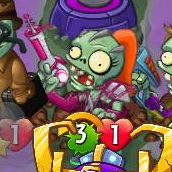 Ice Pirate while Pecanolith is on the field 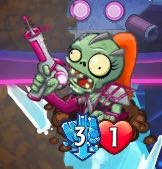 Gigantic Ice Pirate due to being shrunken by Shrinking Violet but later put back in a gravestone
Community content is available under CC-BY-SA unless otherwise noted.
Advertisement