None
He freezes Zombies in place, showing off how "cool" he is. Plants just roll their eyes.

Ice Peashooter is an Uncommon Spawnable Plant in Plants vs. Zombies: Garden Warfare. He was added in the Zomboss Down DLC update. His weapon is Ice Pea Cannon which deals 15 impact damage and 18 critical damage and slows zombies down. After a certain amount of hits, he freezes the target in place, and the said target can't attack any plants or use its abilities. Its zombie counterpart is the Mr. Freezy.

He freezes Zombies in place, showing off how "cool" he is. Plants just roll their eyes.

This is a decent plant to use as he can freeze zombies quickly. He can even freeze Coffin Zombies, Barrel Zombies, and Outhouse Zombies because he shoots them in their weak spots. This is best planted near the garden to freeze zombies that get near. 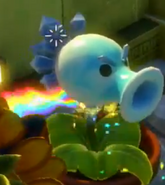 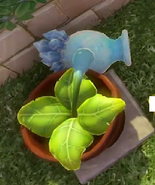 Ice Peashooter in a pot
Add a photo to this gallery

Retrieved from "https://plantsvszombies.fandom.com/wiki/Ice_Peashooter?oldid=2211224"
Community content is available under CC-BY-SA unless otherwise noted.