Ice Pea is the Rare ice variant of the Peashooter in Plants vs. Zombies: Garden Warfare and Plants vs. Zombies: Garden Warfare 2 whose primary weapon is the Ice Pea Cannon, which shoots ice peas that deal 14-19 major damage (16-26 when upgraded), and after multiple hits on a single target, it will freeze the target. This makes them unable to move, attack, or use abilities. The only downside of the Ice Pea is that the sound he makes when his peas hit terrain is much louder, alerting players to the player's presence.

The Ice Pea is the coldest Peashooter around, but still carries a warm personality.

The Ice Pea Cannon is the primary weapon of the Ice Pea; all facts below apply to a fully upgraded weapon.

The Ice Pea's primary weapon is the Ice Pea Cannon. It deals 15 to 25 impact and critical damage depending on the distance. It also deals the same amount of splash damage as the normal Peashooter which is 10. However, if you can hit the enemy enough times, it will freeze the enemy, preventing them from firing their weapon or using their abilities.

Ice Pea is a great character for players who like freezing effects but have less than great accuracy. You can freeze enemies after just a few hits, and this character's splash damage allows for this to be done easier, and you can freeze multiple enemies at once. Use Hyper to rush at your opponents, and use the Chili Bean Bomb to force your opponents into range of your primary weapon. This character is best suited for mid-range combat but can also play a decent long range game if you are skilled at using it.

If you are trying to 1v1 an Ice Pea, it is important to stay mobile, due to the splash damage that the Ice Pea possesses, especially if you are playing as a character with a large hitbox, like the All-Star. Get on elevated ground, and try to snipe from there or use abilities to take it out as soon as possible.

Ammo capacity increases due to the discovery of more ice-packed pea bags.

Ice Pea on the cover of the Craaazy! pack 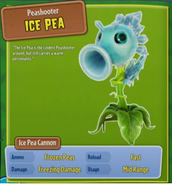 Ice Pea's stickerbook page
Add a photo to this gallery

Retrieved from "https://plantsvszombies.fandom.com/wiki/Ice_Pea?oldid=2210081"
Community content is available under CC-BY-SA unless otherwise noted.