Freeze all Plants here.
Be sure to pack a warm sweater.
Ice Moon is a super-rare zombie superpower environment card in Plants vs. Zombies Heroes and a member of the

to play, and its ability gives all zombies in it the

Strikethrough trait and the

Freeze effect to all plants on the same lane when it is played. The former ability persists until Ice Moon is overridden by another environment.

Be sure to pack a warm sweater.

Since this environment gives any zombie in it the

Bullseye zombies, as well as zombies that activate their abilities when they hit the plant hero, such as Dr. Spacetime.

However, it doesn't synergize with Cheese Cutter and Abracadaver since they are in the

Another way if you are playing as Brain Freeze and Impfinity is to get Ice Moon from Quasar Wizard first, in which Brain Freeze obtained said card (Quasar Wizard) from Frosty Mustache. It also has the ability to

Freeze all plants in it when it is played, allowing you to stall any powerful plants from harming you or a powerful zombie.

If Cryo-Yeti is on the field, Ice Moon can boost him up to a maximum of +4

if it is played on a lane with two plants on it.

You can also use Excavator Zombie to Bounce this environment, allowing you to freeze another ground lane of plants.

Be careful of this environment as it can prevent a powerful plant from attacking and a strong zombie there to do a lot of damage. While the

Freeze effect only lasts for one turn, be wary of the

Strikethrough trait it gives, especially when a high-strength zombie is in it.

While it won't reverse the

Freeze effect, you can override this environment with one of yours to prevent the zombie from getting 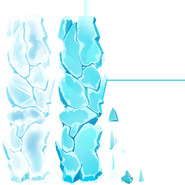 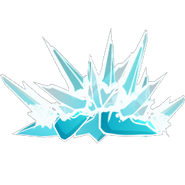 Gigantic Ice Moon due to a glitch