N/A (no zombies sent out)

A money bag
Ice Level is one of the 17 hidden mini-games in the Limbo Page which can only be played using Cheat Engine. This mini-game was considered useless, as no one knew how to play it. It only has six seed slots with plants: Peashooter, Cherry Bomb, Wall-nut, Repeater, Snow Pea, and Chomper. There is no "Restart Level" button and it cannot be saved.

The creators were thinking of making levels covered in snow where the Zombie Yeti would appear, but it did not work out, so it was left in an incomplete state. When they ended up abandoning the idea, it was still left in the game's data, but there were no zombies, no sun falling from the sky, and no snow. Supposedly, this was because they forgot to remove the data for the level itself, and only removed the level's settings, leaving defaults in instead. For more information, click here. Just use the arrows below to flip through the pages.

With no zombies (or nearly anything for that matter), you need to hack the game more in order to win this level.

Play Survival: Day modes, until the final wave. When all zombies have appeared on the screen, change the saved data to game1_42.dat. Then go to the Ice Level and kill the last zombie. Get the trophy and you win the game.

Close Plants vs. Zombies if it is open, then open your save file in a hex editor (located at C:\ProgramData\PopCap Games\PlantsVsZombies\userdata in Windows Vista and above, or in the Plants vs. Zombies installation folder in Windows XP), go to offset 0x0B4, change the data from 00 to 01, and then save. The next time when you open the Limbo Page, there should be a trophy mark on the Ice Level button. 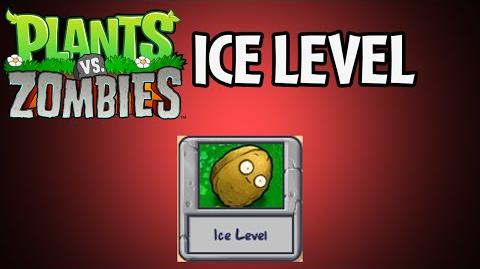 Retrieved from "https://plantsvszombies.fandom.com/wiki/Ice_Level?oldid=2253774"
Community content is available under CC-BY-SA unless otherwise noted.