The Ice Cactus was thought to be a myth. Most Plants didn't believe it could snow in the desert, let alone be an environment that Plants could emerge from. Well, they were in for an ice surprise.

Ice Needle is the primary weapon of the Ice Cactus; all facts below apply to a fully upgraded weapon.

The Ice Cactus' primary weapon is the Ice Needle. It deals less damage than the standard Spike Shot, at around 15-20 impact damage and 18-24 critical damage. It compensates for this by slowing then freezing enemies when hit enough times.

Ice spikes are both sharper and colder, causing more damage.

The Ice Cactus is an ideal plant to have around if the zombies rely on high movement speed to attack the plants, as about five consecutive hits from the Ice Cactus will cause them to freeze in place for about three seconds (allowing another plant to finish them off). The Ice Cactus shoots noticeably faster than the default Cactus but the below-average needle damage (which can deal as little as 16 damage at long ranges and no more than 26 at maximum) makes it difficult to vanquish Zombies solo. The Ice Cactus is quite useful for players who like to play the role of a "support" Cactus (that is playing as a Cactus to assist another Cactus in killing zombies) as the ability to stop zombies in their tracks by freezing them makes a Cactus' work a lot easier as it can, for example, allow a Camo Cactus to line up lethal headshot. Accuracy is essential to using Ice Cactus effectively, especially compared to Ice Pea.

Ice Cactus in a teaser for the game 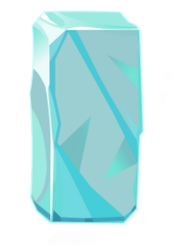 Ice Cactus in the Plants vs. Zombies: Garden Warfare 2 Christmas promotional picture
Add a photo to this gallery

Retrieved from "https://plantsvszombies.fandom.com/wiki/Ice_Cactus?oldid=2336155"
Community content is available under CC-BY-SA unless otherwise noted.