I, Zombie Too is the second level of I, Zombie in Plants vs. Zombies.

The name is a pun on "I, Zombie Two" as it is the second I, Zombie level. It could also be a pun on the zombies' bad grammar, saying "I'm a zombie too."

As Screen Door Zombie's screen door is resistant to Snow Pea's freezing effect of slowing down zombies, it is best to use them in the lanes with Snow Peas, but be aware that a Spikeweed can damage the zombie, even if he still has his screen door, as the Spikeweed attacks from below, so do not use him in the rows with two Spikeweeds, because you will be more likely to waste 100 sun. There may be rows with two Snow Peas, but in these rows, there are no Spikeweeds, so put a Screen Door Zombie in these rows.

Use Buckethead Zombies in the rows where there are multiple Spikeweeds, as normal Zombies and Screen Door Zombies would not survive in that row. Remember that, and you are good to go.

Something worth noting is that the top row always has exactly two Spikeweeds, one Sunflower, and one Peashooter, and sending a Buckethead Zombie is a guaranteed free 125 sun profit on top of a brain. There is also a chance that one of the other rows can have the Snow Pea with the other two Spikeweeds, albeit a very low one. 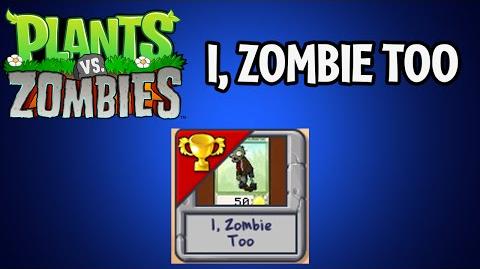 Plants vs. Zombies - I, Zombie Too PUZZLE MODE
By Drek'TharSuperSword 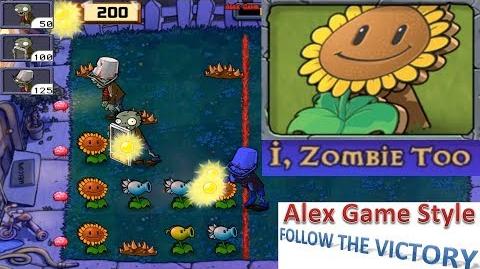 Plants vs. Zombies (PC) - Puzzle - I, Zombie Too Gameplay Playthrough
Add a photo to this gallery
Retrieved from "https://plantsvszombies.fandom.com/wiki/I,_Zombie_Too?oldid=2283061"
Community content is available under CC-BY-SA unless otherwise noted.