Plants vs. Zombies Wiki
Register
Don't have an account?
Sign In
Advertisement
in: Featured articles, Modes, Puzzle Mode,
and 5 more

Not to be confused with the level of the same name, I, Zombie.
For a similar Brain Buster in the Chinese version of Plants vs. Zombies 2, see Zomboss Test Lab.

I, Zombie (i, Zombie on mobile) is a series of Puzzle Mode levels, in which the player "plants" zombies with sun to destroy cardboard plants and get to the brains at the end of each row. A level is completed when all of the brains have been eaten, but if the player runs out of sun before all the brains are eaten, they will lose. The last level, I, Zombie Endless, is an endless mode. After every three streaks of I, Zombie Endless, a present containing a Zen Garden plant, a chocolate, a money bag with gold coins, or a diamond will drop.

"I, Zombie" is a reference to the book and film I, Robot.

It can also be based on the quote "I Frankenstein." 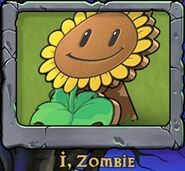 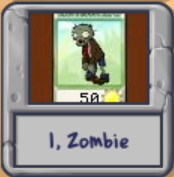 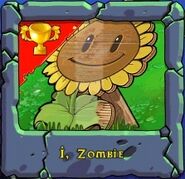 Can You Dig It?

I, Zombie is a very strategic puzzle game. First, you must find ways of getting the brains whether by using Gargantuars to smash them, or other zombies to eat them. Additionally, sun must be collected first by also having zombies eat Sunflowers or Bungee Zombies stealing them. You must have a good understanding of the abilities of both plants and zombies. For example, if a row has only two or three cardboard Peashooters, it is safe to say that sending out a Buckethead Zombie or a Football Zombie will earn you a brain and further them to completing the level. You cannot take back zombies once they are placed, so you must plan wisely according to the cost of each zombie and the amount of sun left. Each Sunflower eaten will give 200 sun.

There are ten levels of I, Zombie, which get harder in succession. All of the levels take place in the equivalent of the Night stage of the game, presumably so that the player can only get sun from getting rid of Sunflowers and for the mushrooms to stay awake.

See Plants vs. Zombies/Gallery and all I, Zombie articles.