But you can just call me Crazy Dave.
Hypno-shroom has different capitalization or spelling depending on what game it is in. When editing, use the term used in the game in question.

For other uses, see Hypno-shroom (disambiguation).

None
Get too close, and he'll make you lose your marbles!

Unlike in Plants vs. Zombies and its sequel, his purpose isn't to make a zombie fight on the plants' side. Instead, once spawned, he starts hopping around while looking for playable zombies and if he spots one, he will latch on to them by attaching a beam called the Hypno Leech to the targeted zombie.

If a player is targeted by this beam, it will disrupt the player's vision and causes the player to move randomly, but they can still fire their weapon, while dealing a small amount of damage.

The Hypno-shroom will continue to follow after the targeted player indefinitely until he is vanquished. His other attacks are longer range Hypno Shot and Hypno Pulse.

CLOSE RANGE: DISRUPTION
Get too close, and he'll make you lose your marbles!

The effect caused by Hypno-shroom 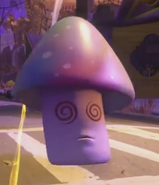 A close glance at the Hypno-shroom 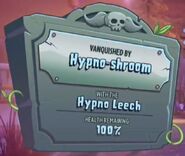 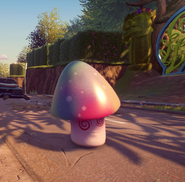 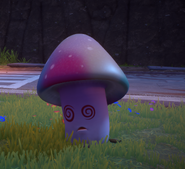 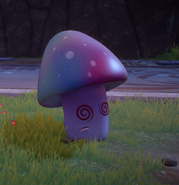 A third close-up of a Hypno-shroom 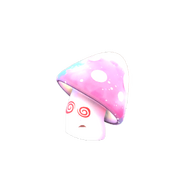 Hypno-Shroom's icon in Battle for Neighborville 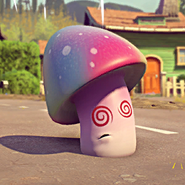