Plants vs. Zombies Wiki
Register
Don't have an account?
Sign In
in: Plants, Mushrooms, Night Obtained Plants,
and 5 more

When eaten, Hypno-shrooms will make a zombie turn around and fight for you.

Makes a zombie fight for you

Sleeps during the day

The Hypno-shroom is a single use mushroom that causes the next zombie biting it to turn around and attack other zombies. It is the ultimate passive-aggressive plant, for those who dislike all that messy killing. The Hypno-shroom has swirly eyes, suggesting that it hypnotizes. It seems to be based of various psychedelic mushrooms, which affects the thinking of the brain. It makes the zombies turn into a pink/purple color.

When eaten, Hypno-shrooms will make a zombie turn around and fight for you.


Special: makes a zombie fight for you


Sleeps during the day


"Zombies are our friends," asserts Hypno-shroom. "They're badly misunderstood creatures who play a valuable role in our ecology. We can and should do more to bring them round to our way of thinking."

The Hypno-shroom cannot affect Catapult Zombies, Zombonis, or Gargantuars as they simply smash it flat, while Dolphin Rider Zombies and Pole Vaulting Zombies and Pogo Zombies that still have their dolphins, poles or pogo sticks respectively, will jump over it. Also, Balloon Zombies with balloons will float over it while Bungee Zombies will simply take it. It is the 13th plant received and is obtained after level 2-5.

The Hypno-shroom is mostly useful for dealing with powerful enemies like Football Zombies and Dancing Zombies. Note that if the Dancing Zombie eats a Hypno-shroom, all the Backup Dancers it summons thereafter will be hypnotized for some reason (probably because the Backup Dancers don't have a brain and just follow their leader). Be careful when placing the Hypno-shroom in front of a Dancing Zombie, or you may only end up hypnotizing a Backup Dancer, however, that is not necessary.Beware that when hypnotizing zombie that has special abilities, the zombie won't always use their special ability. For example, Pogo Zombies, Dolphin Rider Zombies, and Pole Vaulting Zombies cannot use their pogo stick, dolphin, or pole, respectively, to attack other zombies since they would have already lost them at the point where they could eat the Hypno-shroom. Screen Door Zombies and Newspaper Zombies cannot use their shield to protect them from other zombies, but Ladder Zombies will use their shield/ladder to protect themself. Snorkel Zombie has no use to submerge to eat other zombies. Balloon Zombies have to land before they can eat the Hypno-shroom and thus, cannot use their balloons to fly above other zombies. Digger Zombies can't dig again and eat other zombies from behind. However, Dancing Zombies will continue to summon hypnotized Backup Dancers. In later levels it is nearly useless, due to the increasing numbers of zombies that do not eat, such as Gargantuars and Zombonis, as well as the number of zombies later on.

Try to get the Dancing Zombie to eat the Hypno-shroom, or you will end up with too many Backup Dancers to deal with.

The Football Zombie is probably the most important to get with the Hypno-shroom, as there are no Magnet-shrooms or Wall-nuts to defend with. Once it's taken care of, drop any remaining Hypno-shrooms on the far left, just in case any zombies make it past your Puff-shrooms and Left-facing Repeaters. 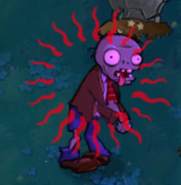