When a Zombie enters or leaves this lane, it gets +1

Are the Zombies hunting dinosaurs, or are the dinosaurs hunting them?
Hunting Grounds is a triassic super-rare zombie environment card in Plants vs. Zombies Heroes and a member of the

to play, and its ability gives all zombies in it the Hunt trait, and +1

to any zombie when they move in or out of it, including when they are played in Hunting Grounds.

This ability persists until Hunting Grounds is overridden by another environment.

"Hunting grounds" is a term used to describe areas where hunting animals is legal.

Its description may be a partial reference to the dinosaur skeleton seen in it, which seems to resemble the T. rex in Plants vs. Zombies 2.

Are the Zombies hunting dinosaurs, or are the dinosaurs hunting them?

Hunting Grounds is a useful and efficient environment. It prevents setup plants like Pea Pod or Sunflower from giving your opponent an advantage, or

Zombies who activate their ability by doing damage, destroying plants, or getting hurt, such as Kite Flyer, Gas Giant, and Overstuffed Zombie, Amphibious zombies, or zombies with the

Strikethrough trait are good with the Hunt trait, while zombies with low health, the

Bullseye trait, or an ability that activates by hurting your opponent (unless they have

Overshoot) are poor choices to play in Hunting Grounds.

The downside of Hunting Grounds is that zombies get Hunt only when they are in it, meaning that zombies lose said trait once they leave the lane, so they can't keep tracking down plants nor move back into Hunting Grounds by themselves (without the aid of an ability like Energy Drink Zombie and Fraidy Cat's). This only gives zombies +2

Also, zombies having the Hunt trait means that they are more susceptible to damage. While that is compensated by the boost, Vitamin Z is better if you don't want them to have Hunt, such as if you want a non-

Strikethrough zombie to hit your opponent. Still, Hunting Grounds can boost zombies indefinitely until overridden, so it is a good addition in the right deck.

All Beastly heroes can use this to activate Cat Lady and Zookeeper's abilities, but the environment is best with zombies that would benefit from the environment's ability itself. Immorticia synergizes with Hunting Grounds somewhat well, as she has access to Zom-Bats, Kite Flyer, and Duckstache. However, her

Bullseye zombies won't like being played in Hunting Grounds. Same goes for Brain Freeze, who has access to moving cards like Smoke Bomb to move zombies back into Hunting Grounds, and

Strikethrough zombies, but his

Anti-Hero zombies are better off being played somewhere else.

Playing Fire Rooster in Hunting Grounds and giving it

Deadly will allow it to destroy any non-

Armored plant that is played afterwards, but this requires some setup beforehand. The Smash's

Hearty zombies don't necessarily benefit from Hunt, but they can at least block off some plants. And finally, Electric Boogaloo can use Hunting Grounds to force his zombies to get hurt or destroyed purposely to activate their respective abilities.

Hunting Grounds gives any zombie a good boost and the ability to track down and destroy plants, giving you a hard time when building your defenses. But the most dangerous feature of Hunting Grounds is that you can't set up, and have to go either full offense or defense. This makes it hard for frail plants that require setup, like Doubled Mint.

Since zombies played there get Hunt, one solution is to face the zombie directly and play a plant in Hunting Grounds, as the zombie won't be able to move out and get another +1

. However, this means that you can play only one plant per turn, as the next one you play will move the zombie out of Hunting Grounds. A better strategy is to either protect your plants with Team-Up walls, Bounce the boosted zombies, or override the environment. 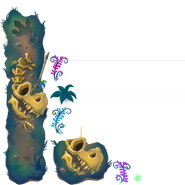 Hunting Grounds on the field