Zombie that can throw snow balls at range to cool down plants until they freeze into blocks.

Shoots three snowballs each time it uses its special

(can attack both frozen plants/zombies and the Hunter Zombie himself)

(immune to being frozen)

(can attack from behind and avoid his snowballs)

(cannot be hit by snowballs)

Frostbite Caves - Day 4
Shhhhh ... Hunter Zombie didn't actually kill that sabertooth tiger. He found the skin at a thrift store. Also, he's a vegetarian. Tell no one.
Hunter Zombie is the fifth zombie encountered in Frostbite Caves in Plants vs. Zombies 2. He throws chilling snowballs at the player's plants within a range of 4 tiles, freezing them in frozen blocks after three hits, with the exception of most plant in the Winter-mint and Pepper-mint families. for an exact list, the Hunter Zombie cannot freeze Snapdragon, Pepper-pult, Fire Peashooter, Torchwood, Lava Guava, Jack O' Lantern, Wasabi Whip, Cold Snapdragon, Winter Melon, Missile Toe and Iceweed.

After shooting, he will continue moving towards the player's house, and then repeat the process randomly again and again if there is any plant in front of him, as long as it is not a low plant like Spikeweed. Hunter Zombie cannot throw snowballs at plants behind a frozen plant, but he can throw snowballs if the plants are behind a frozen zombie, thus making him an environmental modifier.

Like all Frostbite Caves zombies, he cannot be frozen, and attempting to do so will only chill him.

Hunter Zombie pretty much has the same body structure as a regular zombie. He has a dark brown beard and, like all zombies in Frostbite Caves, has the same Neanderthal-like forehead. He dons a dead saber-tooth tiger-like hat on top of his head, a brown furry coat with white furry frills, and his feet are wrapped in leather. He carries a large bone on his left hand and carries a bag of snowballs strapped around his shoulder.

Zombie that can throw snow balls at range to cool down plants until they freeze into blocks.

Shhhhh ... Hunter Zombie didn't actually kill that sabertooth tiger. He found the skin at a thrift store. Also, he's a vegetarian. Tell no one.

Hunter Zombies will be very dangerous without lobber plants, thawing plants or plants that are immune to snowballs, especially since they come in groups in later levels (and in Icebound Battleground). He uses his disadvantage, which is his speed, as an advantage against your defenses. This allows him to "hide" behind other, stronger zombies, protecting him from damage while he freezes your plants. Therefore, thawing plants are vital to prevent these zombies from overrunning your defenses. Fire Peashooter can kill him easily.

It is best to Kill him quickly, as he can freeze the frontmost plants. This could result in the plants being frozen and many other zombies passing through frozen plants causing either your brains to be eaten or you having to use countless coins to thaw plants. These zombies are especially deadly if plants are not properly defrosted. When combined with the freezing winds of the Frostbite Caves, this zombie can cause entire swaths of plants to be frozen and disabled.

You can use Guacodiles against this zombie if planted right next to him, although two are needed to instantly kill him. It is crucial that you plant the Guacodiles close to a Hunter Zombie, as if you do not, the Hunter Zombie may freeze it since the attack does not trigger his rushing ability.

Torchwoods and peashooting plants like the Repeater can do fast and high damage to this zombie. Lava Guavas are also effective against this zombie. Since Lava Guavas are immune to their snowballs and can cause much damage to the zombies that are behind the Hunter Zombie. However, with Snapdragon gaining warming properties in 9.0.1, the viability of these strategies are now under severe competition, as Snapdragon, a cheap and fast-recharging plant, is not only immune to frost but also warms nearby plants, while his area damage is far more effective than most other warming plants.

Cold Snapdragon and Missile Toe cannot thaw plants, but they are immune to his snowballs, so they could also be used to protect other plants. Beware that other ice-based plants are not immune, and the zombie is unable to be frozen at all.

If you are going to beat this zombie without his weaknesses, it is recommended to use Plant Food on an Infi-nut, whose barrier covers an entire lane and blocks all snowballs. In addition, lobber plants such as Cabbage-Pult, Kernel-Pult, A.K.E.E. and Spore-shroom can ignore the frozen plants or zombies and attack him directly. Laser Beans, Fume-shrooms, Cactus and Shadow Peashooters are also useful since their attacks can damage both frozen blocks and Hunter Zombie himself.

If you are playing Icebound Battleground, try to have the aforementioned plants boosted in the Zen Garden so that none of your plants will get frozen. Also, while this isn't immediately obvious, Hunter Zombie does eat plants, and has an enforced delay between his attacks, which he cannot use while eating something, so putting a defensive plant right in front of him or supporting it with a thawing plant will eventually force him to eat the plant anyway. His snowballs also don't affect hypnotized zombies and he has to eat them, so these may be effective against him also. 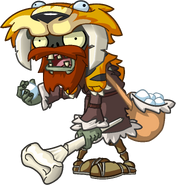 Hunter Zombie with a transparent background 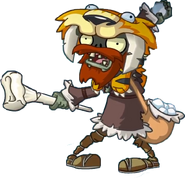 Two Hunter Zombies throwing snowballs at two plants, one of them already frozen

A Hunter Zombie eating a Wall-Nut 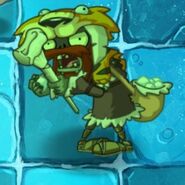 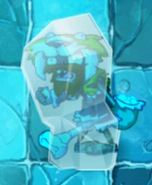 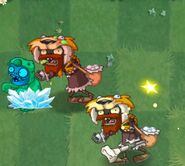 Hunter Zombie in the trailer

Hunter throwing a snowball at a partially frozen Repeater

Hunter Zombie throwing a snowball at a Wall-nut (Animated) 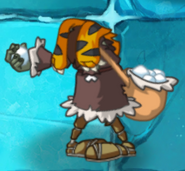 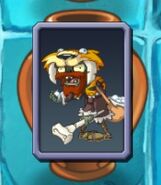 Hunter Zombie in a vase 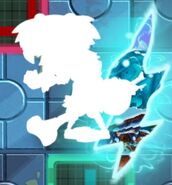 Hunter Zombie coming out of a portal

A fainted Hunter Zombie at the moment he has just thrown a snowball, 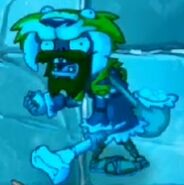 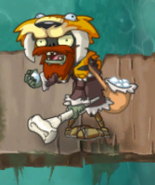 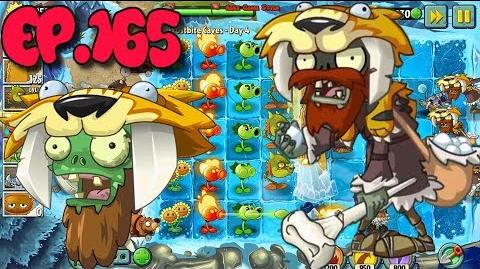