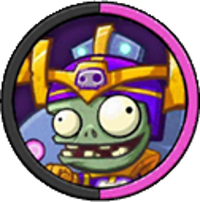 Huge-Gigantacus is a zombie hero in Plants vs. Zombies Heroes and a leader of the

Sneaky classes, alongside Super Brainz. His signature superpower is Terror-Former 10,000, which Conjures an environment card and reduces the cost of all cards in his hand by 1

As with Impfinity and Z-Mech, he is a hero version of Imp.

His name and appearance are based on Galactus, a fictional character appearing in American comic books published by Marvel Comics. His name is also an example of irony, as Huge-Gigantacus is based on an Imp, one of the smaller zombies in the game.

The fact that he is small and sits in a floating chair could be a reference to Collectimus from Ben 10: Omniverse.

One of his strategy decks, "Doctor What?," is a reference to the science fiction TV show, Doctor Who, while his other strategy decks, "Mission Imp-possible" and "Dark Side of The Moon," are references to Mission: Impossible, Pink Floyd's album with the same name and Transformers: Dark of the Moon, respectively.

Go on, tell him he's actually quite small. See what happens. You're not going to like it.

Due to him leading the same classes as Super Brainz, similar strategies can also be applied to this hero, as he has access to bonus attacks,

Overall, this hero is really useful in an environment deck as all of his superpowers involve using environments.

Like Super Brainz, his main weakness is rush decks and the lack of healing without Conjuring abilities, so opponents can play many cheap plants against him to overwhelm him. The only thing he can do is rely on the environments given via superpowers or use Fire Rooster and/or Trapper Zombie.

This hero is mainly made to create a lot of environments, including Teleportation Station to draw Teleport cards and Ice Moon to

Freeze plants and making a zombie to pierce your defenses. Use similar strategies that you would use against Super Brainz when facing this hero, but be careful of the environments he can play. Not to mention, be careful if he uses his signature superpower as he will play cards at cheaper costs for the next few turns. You can also take advantage of his environments by using cards such as Vegetation Mutation and Plantern.

Retrieved from "https://plantsvszombies.fandom.com/wiki/Huge-Gigantacus?oldid=2273071"
Community content is available under CC-BY-SA unless otherwise noted.