For the version in Plants vs. Zombies Heroes, see Hover-Goat 3000 (PvZH).

None (game incorrectly says Super Rare)
"As the legend goes, Hover Goat-3000 came from the future, but he was too radical and needed to be contained. Now he is released and out to show everyone what cool looks like!"

Hover Goat-3000 is a playable zombie class in Plants vs. Zombies: Garden Warfare 2 that was released in the Trials of Gnomus DLC, alongside the Torchwood as a reward for completing the Trials of Eternity. The player needs to open all 5 locks of the Hover Goat-3000 chest, each lock requires 15 Rainbow Stars to be unlocked, resulting in the total of 75 Rainbow Stars to unlock this class.

"As the legend goes, Hover Goat-3000 came from the future, but he was too radical and needed to be contained. Now he is released and out to show everyone what cool looks like!"

His weapon is called the Radical Raygun, it holds 35 ammo, and has mediocre fall off damage. It has a very fast rate of fire with damage ranging from 9-5 critical and 6-4 regular shot. The weapon plays a short beat upon reloading.

This character does not and will not have any variants in the future as confirmed by the developer of the game. although it does now have costumes.

Hover Goat-3000 works really well in Gnome Bomb since its Tubular Turbo ability will work on any zombie carrying the gnome bomb. This can be especially useful if the person holding the gnome bomb is a fast character or a character with a lot of health, which will make it easier to get to a gnome bomb planting location. The Hover Goat-3000 is also effective in Suburbination due to the fact that like Gnome Bomb, Tubular Turbo allows a group of zombies to quickly capture objectives. Like Rose, he has good speed and jumps higher than most other zombies. An advantage of the Hover Goat-3000 is that he can't be Goatifyed by the Rose because he is already a goat.

When Hover Goat-3000 is using his Damage Buff Booster Beam on another zombie, it's not advised to attack alone; seeing as it would be a 2 vs. 1 situation, you will most likely get vanquished. Try to find him alone or have a plan to take him out. If he uses the Mega Awesome Laser when you're around, get away from him immediately, as he can easily kill you in that form. You should be able to outrun him due to his greatly reduced movement speed when in that form. Usually the best way to take a Hover Goat-3000 down is to snipe from a distance as their weapon has fall off damage and they have pretty low health to start with.

In Gnome Bomb, be careful if there's a Hover Goat-3000 in the game, as they can make the gnome bomb get to the plant objectives really quickly with its Tubular Turbo ability. Try and hunt them down before they have the chance to speed up any zombie. 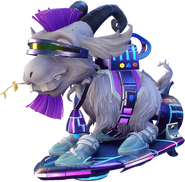 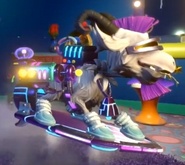 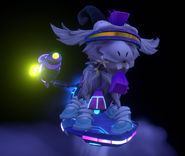 Another close-up of Hover Goat-3000 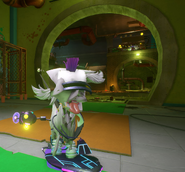 A morph of Chomper and Hover Goat-3000, using a variant of the Team Swap glitch 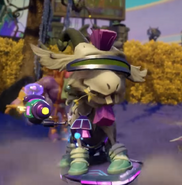 The hover-goat pack
Add a photo to this gallery

Retrieved from "https://plantsvszombies.fandom.com/wiki/Hover_Goat-3000?oldid=2295288"
Community content is available under CC-BY-SA unless otherwise noted.