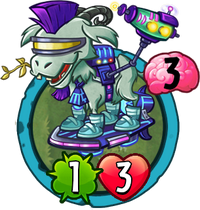 For the version in Plants vs. Zombies: Garden Warfare 2, see Hover Goat-3000.

When played: Another Zombie gets +2

. It has the Amphibious trait, and its ability gives a selected zombie, excluding it, +2

when it is played and gives it the Bounce effect immediately after it takes damage, unless it gets destroyed. Its closest plant counterpart is Grow-Shroom.

It is based on the zombie class from Plants vs. Zombies: Garden Warfare 2 with the same name and appearance.

The first and third sentences in its description are references to its name, while the second sentence may be a reference to Hover Goat-3000's primary weapon, the Radical Raygun.

Hover-Goat 3000 is an amazing zombie when it comes to boosting other zombies. Compared to Loudmouth, it does not have the Gravestone trait, but it has 2 health more and the Amphibious trait. This can replace Loudmouth as you can boost another zombie right away before plant threats like Berry Blast are able to destroy a zombie. However, the boost can only be given to another zombie and not itself, meaning that that this ability is useless if there are no other zombies on the field, so do not play it alone unless you absolutely need a shield to block a plant.

Additionally, it has another ability that is quite handy as it can Bounce itself if it takes 2 or less damage in its lane without health boosts. This can allow you to play this over and over again, allowing you to boost other zombies greatly. This is even more useful because it has the Amphibious trait. If your opponent played a weak Amphibious plant like Sting Bean, you can play Hover-Goat 3000 there so it can be Bounced. This can turn in your favor to boost another zombie twice or more.

All Beastly heroes can use this zombie for synergy, namely to boost their pet decks with Zookeeper or Cat Lady. And because this Bounces itself when it takes low damage, you can play this again and boost your pets again. Aside from pets in general, you could also use this with a swarm of Goats to boost them all at once since this getting hurt activates Goat's ability.

Each Beastly hero can also use this card effectively in their own ways:

If you are fighting a

Guardian hero, preferably Spudow, you can also play it in Hot Lava or Spikeweed Sector to Bounce Hover-Goat 3000. However, if you are facing a Smarty hero, you must be aware that Jelly Bean can take advantage of it once it gets Bounced, so keep that in mind.

This zombie can be quite threatening as it can boost another zombie, which is similar to Loudmouth. But it also has the ability of Kangaroo Rider as if it takes damage and is not destroyed in one hit, it Bounces itself and your opponent can play this again. You can use the same strategies to deal with Kangaroo Rider, but keep in mind that this zombie also has the Amphibious trait. The fact that most Amphibious plants lack in strength does not help either.

Fortunately, Hover-Goat 3000 is not that hard to destroy due to its average health. If Hover-Goat 3000 is played on the aquatic lane, Berry Blast or Whack-a-Zombie can destroy it at ease. Kernel Corn can do a better job at countering Hover-Goat 3000 as he can also destroy the zombie boosted by it, but he is exclusively a late-game play. But while you take care of this zombie, be sure to also take care of the other zombie that got boosted by it. You can also Bounce the boosted zombie to remove its boosts, but be careful of "When played" abilities such as Zombot 1000 and Flamenco Zombie's.

You can also attempt to clear the field so that Hover-Goat 3000's boosting ability does not activate. If clearing everything at once is not possible, focus on the strongest zombies first.

It is also recommended to have Jelly Bean on the field as punishment for playing Hover-Goat 3000 once it gets Bounced.

Retrieved from "https://plantsvszombies.fandom.com/wiki/Hover-Goat_3000_(PvZH)?oldid=2291324"
Community content is available under CC-BY-SA unless otherwise noted.