House Gargantuar is a boss in Plants vs. Zombies: Garden Warfare 2. He appears in Backyard Battleground and Garden Ops. He uses the front of a yellow house with white outlines as a shield and his weapon. The House can absorb a lot of damage, about half a Gargantuar's health, but shooting him from behind or through the "window" hole will do direct damage. 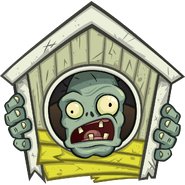 House Gargantuar is tough. Make sure to not target the shield due to the fact that this zombie will turn into a normal Gargantuar if that happens, thus giving the player more work to do. One strategy is to try to find something to distract him on, like a weed, another player, potted plant, and then attack him from the back. If you are fighting alone in Garden Ops, then you should plant a potted plant to distract him with, and then attack him from the back. Since he is a boss, he will likely kill the potted plant easily, so be aware of this. Potted plants like Ice-shroom , Scaredy-shroom, Heal Flower, Fume-shroom work best.

Retrieved from "https://plantsvszombies.fandom.com/wiki/House_Gargantuar?oldid=2210612"
Community content is available under CC-BY-SA unless otherwise noted.