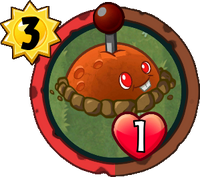 For other uses, see Potato Mine (disambiguation).

When destroyed: Do 6 damage to a zombie here.
Sure, he has an explosive temper. But for the most part, he's pretty even peeled.

Hothead is a token plant card in Plants vs. Zombies Heroes and a member of the

Guardian classes. He can be made by Tater Toss, Spudow's signature superpower. He costs 3

to play (only when he is Bounced, Conjured, or transformed from Reincarnation) and has 1

. He has the Team-Up trait, and his ability does 6 damage to a zombie on his lane when he is destroyed.

His appearance is a visual pun on "hothead," a person who gets angry very easily, as Hothead is literally Spudow's head.

Sure, he has an explosive temper. But for the most part, he's pretty even peeled.

Hothead can remove a majority of tough zombies all the way up to around turn 5-6. (However, do not use him against Space Cowboy, because if he destroys Hothead, it will lead to Space Cowboy moving before Hothead does damage.) The way you would play this is pretty much how you would use any removal; if you deem a certain zombie a huge threat to your strategy, you would play him there to remove it. While you could play him to intercept an early-game glass cannon, Hothead is essentially a superpower, making it quite a big waste. The only downside is that Hothead does not directly destroy the zombie, so that leaves him at the mercy of tricks if your opponent has leftover brains, which is always something to keep in mind.

There aren't too many ways to exactly counter this plant due to him being seen mostly as a delayed removal card; and most of the time, he will be played from Tater Toss, so he is harder to counter. If Hothead is played where a zombie is, you have no choice but to lose that zombie unless you have moving cards or Escape through Time. But if Hothead is played on an empty lane, your options are to either trade with a zombie that you don't mind losing, or leave him alone. Trading is usually the better option because leaving Hothead on the field without anything to attack it pretty much disables the lane for any zombies and gives your opponent the opportunity to play something there with Hothead; the only exception is when you can destroy Hothead with tricks. 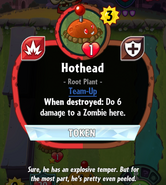 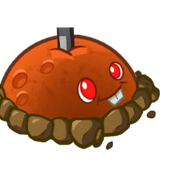 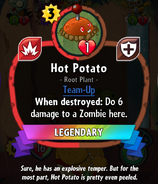 Hothead's statistics, note that he was called Hot Potato
Add a photo to this gallery

Retrieved from "https://plantsvszombies.fandom.com/wiki/Hothead?oldid=2185950"
Community content is available under CC-BY-SA unless otherwise noted.