Gains a speed boost after swallowing a zombie

Super Rare
The Hot Rod Chomper is the fastest Chomper in Suburbia. Equipped with a heavy duty blower, port-and-polished heads, and a lightweight frame, he can race in on the unsuspecting Zombies.

Gains a speed boost after swallowing a zombie

Super Rare
The Hot Rod Chomper is the fastest Chomper in Suburbia. Equipped with a heavy duty blower, port-and-polished heads, and a lightweight frame, he can race in on the unsuspecting Zombies.
Hot Rod Chomper is a Super Rare variant of the Chomper in Plants vs. Zombies: Garden Warfare and Plants vs. Zombies: Garden Warfare 2. He is a playable character which acts as a melee class with a secondary ability to speed up for a limited time after eating a zombie. In exchange for less health than most Chompers, he has the fastest movement of them all (not counting Assistant Manager Bitey).

The Hot Rod Chomper is the fastest Chomper in Suburbia. Equipped with a heavy duty blower, port-and-polished heads, and a lightweight frame, he can race in on the unsuspecting Zombies.

Hot Rod Chomper gets a temporary speed boost every time he eats a Zombie. Cool beans!

Hot Rod Chomper differs from the normal Chomper with his shiny new-looking black paint job accented with purple flames, a chrome mouth, and tongue. Upon jumping or chomping, the Hot Rod Chomper makes motor-like noises. His drool appears to be motor oil.

Being Hot Rod Chomper, speed is a definite benefit. Upon swallowing an enemy zombie, the Hot Rod Chomper gains a temporary speed boost of five seconds to help close in the space between him and another enemy zombie. He also quickly recharges the Goop ability to slow down zombies. The only major disadvantage about Hot Rod Chomper is that its health is only 100 (125 if upgraded), instead of the normal 150. Also, zombies can easily spot him because of the constant noises he makes.

Hot Rod Chomp is the primary weapon of the Hot Rod Chomper. It deals 25 damage. Once a zombie has been eaten, he will gain a speed boost for five seconds.

Movement speed increased due to addition of a supercharged turbo.

A reinforced chassis boosts the health of Hot Rod Chomper.

You can use the extra speed to make a quick getaway to a Sunflower, quickly chase a player down without the use of Burrow, or make way to safety. Try to take advantage of speed such as dodging bullets side to side. However, do not try this while running from an Engineer, as his attacks, even if they miss, can deal splash damage. The speed also allows you to get almost as fast as Peashooter's Hyper.

Try to use abilities that can help you go faster such as Scientist's Warp, Foot Soldier's Rocket Jump or Rocket Leap, Engineer's Turbo Jackhammer or Jackhammer, or the All-Star's Sprint Tackle or Ultra Tackle. However, Sprint Tackle is not recommendable as the Hot Rod Chomper can possibly live and end up getting knocked back to safety. While attempting to flee from or vanquish the Hot Rod Chomper, don't forget about his abilities and speed boost.

Goop can be a major problem when facing this Chomper, especially if he goops while he has his speed boost. To avoid this threat, try to counter it's abilities with your own abilities, such as the All Star's Dummy Shields, which will take the hit from the goop for you. Even better, instant-kill abilities make vanquishing this Chomper easy.

Hot Rod Chomper with Sunflower in a promotional poster 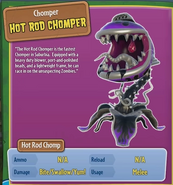