Before combat here: Do 1 damage to each Plant and Zombie here.
Lava has no loyalty. It's just hot. It just IS.
Hot Lava is a triassic uncommon plant environment card in Plants vs. Zombies Heroes and a member of the

Kabloom class. It can also be made by Lava Guava and Fireweed.

to play, and its ability does 1 damage to all plants and zombies in it before combat on the lane it is on.

It is based on lava, molten rock expelled by a volcano during an eruption.

Its description references its ability to damage both plants and zombies.

Lava has no loyalty. It's just hot. It just IS.

While this environment is a downgrade to Spikeweed Sector in some aspects, it can be more beneficial than it if used correctly.

Plants that feature abilities that activate when they take damage or get destroyed can be taken advantage of. For example, Hibernating Beary will get +4

before combat on this environment, which will be very helpful at destroying most zombies or doing serious damage to the zombie hero.

Similarly, Prickly Pear and Mirror-Nut will also activate their abilities before combat. Potato Mine, Primal Potato Mine, or Hot Date can be used to take out zombies with 3

or less, clearing the way for a direct attack, assuming there is a plant behind them. However, note that all of these can only be normally done as Spudow.

As this is an environment, Invasive Species gains a boost from this, which makes it another good choice. However, be warned that Hot Lava will decrease its longevity.

But other than that, do not play plants that have 1

in it, as they will be destroyed before combat. Do not play this on lanes with Jester or Newspaper Zombie either, as doing so will activate their abilities.

This environment can destroy zombies with 1

such as Exploding Imp, Mini-Ninja, Pool Shark, etc. before they even get a chance to attack. If this is played on a lane where one of these zombies is played, you can keep them alive by boosting their health with tricks such as Camel Crossing and Vitamin Z.

However, some zombies can benefit from this environment. A good example is Newspaper Zombie, as he will gain +4

before combat, which will let him destroy stronger plants, or do heavy damage to your opponent. Jester is another good option, as this will activate his ability every turn before combat. 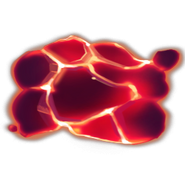 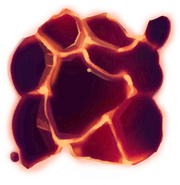 Hot Lava on the field

Hot Lava with other environments