None
He was THIS close to wearing the chicken costume, but darn it, Team Mascot Imp called it first.
Hot Dog Imp is a premium uncommon zombie card in Plants vs. Zombies Heroes and a member of the

Strikethrough trait and does not have any abilities. His closest plant counterpart is Fume-Shroom.

He is based on Imp's Summer Nights costume in Plants vs. Zombies 2.

His name is a combination of the words "hot dog," referring to his costume, and "Imp," the type of zombie he is.

His description makes a reference to Team Mascot and his appearance.

He was THIS close to wearing the chicken costume, but darn it, Team Mascot Imp called it first.

Strikethrough trait, making him able to hurt your opponent and destroy any frail plants behind tough plants with Team-Up at the same time. With conjunction of either Toxic Waste Imp or Super Stench, he can wreak havoc in a lane with tough plants. Since he is an Imp zombie, not only does he benefit from Toxic Waste Imp, but he benefits heavily from Imp Commander as well. His

Strikethrough trait almost guarantees the player to draw an extra card because he can hit both plants and the plant hero, as long as the plant hero does not block the attack. He also works very well with Lurch for Lunch, though only Super Brainz can normally use this combo. If you are playing as Brain Freeze or Impfinity, you can boost Hot Dog Imp to be able to do massive damage to your opponent and their plants. If you are playing as Neptuna, you can boost his health to survive attacks, especially when facing off against Shroom for Two or Pair of Pears.

or less and Hot Dog Imp is played on the leftmost lane, you can win the game without your opponent stopping him, as zombies attack first, defeating your opponent before you are defeated. However, be warned that your opponent can still block his attack, or

Freeze or destroy him.

Berry Blast, Weed Whack, and Sunburn can destroy him easily, while Iceberg Lettuce or Big Chill can prevent him from attacking. If he gets out of control (either when boosted or given the

Deadly trait), Lawnmower, Squash, or Sizzle can destroy him. Be sure to keep some tricks or plants with damaging or destroying abilities in hand if you are low on health and you suspect Hot Dog Imp to be played.

If you want to prevent him from being a huge threat, try to prioritize on destroying Toxic Waste Imp or Imp Commander first. 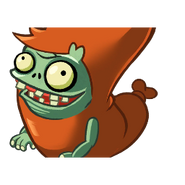 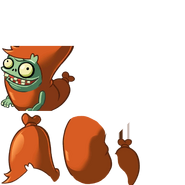 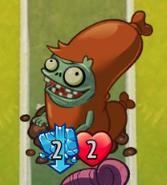 Hot Dog Imp tinted gray due to a glitch

Gigantic Hot Dog Imp due to a glitch 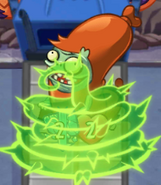 Lurch for Lunch being played on Hot Dog Imp