For the version in Plants vs. Zombies 2, see Hot Date.

When played: Move a Zombie to this lane.
When destroyed: Do 3 damage to a Zombie here.
He's a hot commodity on dating sites such as eGardening, Thatch.com, and OKTulip.
Hot Date is an event plant card in Plants vs. Zombies Heroes and a member of the

He was added in the 2017 Valenbrainz event, along with Sportacus and Stupid Cupid. He became craftable as of update 1.14.13.

Hot Date can be described as a combination of Sweet Potato and Primal Potato Mine, with the ability to move a zombie to his lane and do damage to the zombie in his lane upon being destroyed. This is useful for low-health threats like Stealthy Imp, Zookeeper, Zombie Chicken, and Fire Rooster, or Amphibious zombies like Dolphin Rider and Ducky Tube Zombie.Keep in mind that this plant does not have the Team-Up trait, so he cannot be used to protect other plants.

You could also boost Hot Date with strength-boosting cards such as Spineapple if the damage output is not enough.

Hot Date may be fragile, but he can mess up your strategies and easily take out any zombie with 3 health or less. The best way to handle him is to destroy him with high-health zombies.

Armored and shielded zombies excel at this, as their traits reduce the damage they take. Any zombie with high health will do, however. You can use Rolling Stone to destroy him, but keep in mind that he may destroy any zombie you have there. If you are a

Sneaky zombie hero, you can use Smoke Bomb to move the zombie, and then play any trick you like to destroy him. Hot Date is harmless if there is nothing on his lane, unless your opponent uses Spineapple or boosting tricks. You can also Bounce him to remove Hot Date from the field, preventing the ability for a turn.

Hearty hero, you can use Escape through Time on a zombie that is in front of Hot Date. 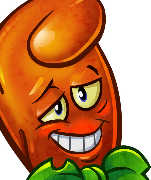 Hot Date on an advertisement for the Valenbrainz Bundle

A notification about Hot Date being available

Hot Date on the advertisement for the Valenbrainz Mega Bundle 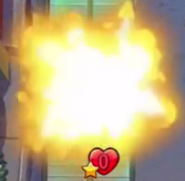 Hot Date exploding after being destroyed

Hot Date's projectiles after being destroyed

Hot Date cards in the redraw section along with Vanilla, Flourish, and Pea Pod, note that Hot Date does not belong in the Mega-Grow or Smarty classes 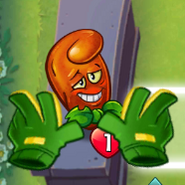 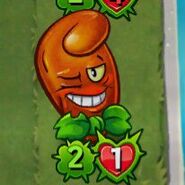 Hot Date while Pecanolith is on the field