Homing Thistles fire seeking shots at targets that are closest to home.

(can block or deflect projectiles)

Don't even think about trying to pull one over on Homing Thistle. He's got a bead on you. He sees right through your facade. It's like he has a laser beam ... aimed at your soul.

Homing Thistle is a premium plant that was released in the 2.9.1 update of Plants vs. Zombies 2. He attacks in a way similar to the Cattail, shooting spikes that home in (as the name implies) on the zombie nearest to the Player's House. However, Cattail shoots two spikes at a time with each spike dealing 20 DPS, while Homing Thistle shoots one thistle instead with each thistle dealing 40 damage per shot. He now costs 100 gems. Like Cattail, Homing Thistle's attack is triggered by a zombie appearing in any lane.

In the 3.4.4 update of the game, the accuracy of Homing Thistle's attack was changed. Instead of every needle hitting the leftmost zombie, they are now much more inaccurate and will sometimes hit random zombies or even go off the lawn without hitting anything. Sometimes after he has destroyed a zombie, he will attack somewhere random, perhaps not hitting anything or damaging a gravestone. This was fixed as of the 5.7 update though; in the current version of the game it still shoots randomly after defeating a Zombie.

Homing Thistle is based on thistles, a plant group known for their prickly leaves; possibly the milk thistle (Silybum marianum) due to its large spikes and the flower's shape and color. His name is a combination of the aforementioned "thistle"; and "homing missile," a weapon that is known to target a location or object and adjust his trajectory in order to hit, a quality present in Homing Thistle's projectile.

Homing Thistles fire seeking shots at targets that are closest to home.

Don't even think about trying to pull one over on Homing Thistle. He's got a bead on you. He sees right through your facade. It's like he has a laser beam ... aimed at your soul.

When given Plant Food, it spins and shoots blue needles that target zombies on the screen or tombstones and any lawn obstacles if there are insufficient zombies. The blue projectiles deal 225 damage each, and they sometimes encircle zombies for a long period of time. If there are no zombies present on the screen, it will fire the projectiles in a spiral shape.

When boosted by Spear-mint, Homing Thistle will receive an additional 140 DPS to its main attack, and its projectile speed will also increase.

Homing Thistle, in groups, can thin out the ranks of lesser zombies very quickly and pile on damage on single targets, making them a good complement to any offensive. Their flying thistles can target just about any enemy type from anywhere, including Snorkel Zombies while they are swimming, Prospector Zombies after they have jumped, and even Swashbuckler Zombies while they are swinging (the thistles will wait in ambush where they will land). Homing Thistle is also a good choice against Pirate Captain Zombie as a group of them can quickly kill his Zombie Parrot and prevent the plant from being stolen. Since they always target the enemy closest to the lawn mowers first, enemies closing in on the Player's House can expect to take additional damage even if their row is unoccupied.

Homing Thistle, however, requires mass planting for them to be effective by themselves, as groups of enemies with high toughness, such as Buckethead Zombies, can tank through a storm of thistles. This is complicated by their slow recharge time and, ironically, their priority on targets furthest ahead on the lawn, which often causes them to target lesser enemies while ignoring real threats like Buckethead Zombies, or especially high-level enemies such as Gargantuars or Wizard Zombies. If the player is using them exclusively as their only offense, it's best to support them with defensive plants such as Spikerock and Tall-nuts, while using plants such as Cherry Bombs, Chili Beans, Iceberg Lettuce, and similar plants to stall or pick off higher-level enemies.

Avoid using Homing Thistle against Shield Zombie, Jester Zombie, and Excavator Zombie as they will block or deflect its shots, even if boosted by Plant Food. 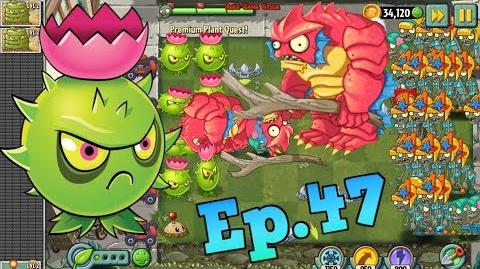 Plants vs. Zombies 2 Homing Thistle Power Up and play Premium Plant Quest (Ep.47)
By Alex5432000
Add a photo to this gallery

Retrieved from "https://plantsvszombies.fandom.com/wiki/Homing_Thistle?oldid=2292889"
Community content is available under CC-BY-SA unless otherwise noted.