Draw two cards.
You got Plants!
Holo-Flora is a super-rare plant superpower trick card in Plants vs. Zombies Heroes and a member of the

to play, and its ability draws two cards. Its zombie counterpart is Telepathy.

It is based on the 3D models of two plants in their Plants vs. Zombies Heroes versions.

Its name is a portmanteau of the words "hologram" and "flora," referring to its appearance.

Its description is a nod to its ability and may be a reference to the "You got mail!" pop up from AOL.

Holo-Flora is a cheaper, but limited version of Flourish which is only usable by Grass Knuckles and Chompzilla. You can either use this in the early-game to gain a head start, or boost a Dino-Roar plant in the mid to late-game. However, watch out for Quickdraw Con Man, as this superpower will force you to take 2

Bullseye damage per each Quickdraw Con Man if played.

You cannot do much to counter this card, since it is a trick. However, Telepathy or Fun-Dead Raiser can nullify your card disadvantage, allowing you to catch up with your opponent. Alternatively, you can play threatening zombies like Unlife of the Party or Mini-Ninja on the first turn to discourage this card from being played early. Quickdraw Con Man is the best option, forcing your opponent to take 2 damage per each Quickdraw Con Man. 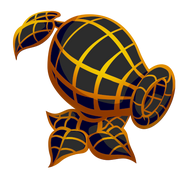 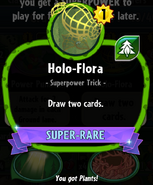 Holo-Flora being played, note that it costs 3 sun due to Defensive End's ability 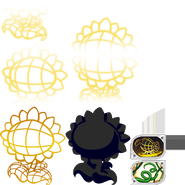 The player receiving Holo-Flora from a premium pack