When hurt: Make a Mystery Egg in a random lane.
Sometimes, what has been seen... can't be unseen. This is one of those times.
Hippity Hop Gargantuar is an event zombie card in Plants vs. Zombies Heroes and a member of the

It does not have any traits, and its ability makes a Mystery Egg on a random lane every time it takes damage, unless all other non-aquatic lanes are occupied.

It is based on the Gargantuar's Springening Piñata Party costume in Plants vs. Zombies 2.

Its name is a combination of "hippity hop," a phrase used to describe a small hop (such as a rabbit's), and "Gargantuar," the type of zombie it is.

Sometimes, what has been seen... can't be unseen. This is one of those times.

Hippity Hop Gargantuar could be considered a superior version of Imp-Throwing Gargantuar, as he has 1 more strength, and the zombies obtainable by Mystery Eggs are more useful than Swabbies.

Since this zombie is both a pet and a Gargantuar zombie, Electric Boogaloo can use it either in his Gargantuar deck, where Hippity Hop Gargantuar will benefit from Smashing Gargantuar, or his pet deck, where it can be used to activate the abilities of Cat Lady and Zookeeper. You can also make it hit harder and be able to take more damage by using tricks like Maniacal Laugh and Vitamin Z, which in turn allows it to make even more Mystery Eggs.

Z-Mech can use Camel Crossing, Medic, and Rock Wall to help Hippity Hop Gargantuar last longer. He can also make use of Gargologist to help play it earlier.

Professor Brainstorm can combine this with Wizard Gargantuar to land 6 guaranteed damage on your opponent. He can also use Teleport to play it on a lane with weak attacking plants to activate its ability, which also prevents instant-kill tricks or transformation cards from being used on it, at least for this turn.

Impfinity can use Mixed-Up Gravedigger, In-Crypted, or Cursed Gargolith to instantly restore its health, which can allow it to make more Mystery Eggs. And while it is in the gravestone, you can then use Headstone Carver to boost Hippity Hop Gargantuar.

Hippity Hop Gargantuar synergizes well with other certain zombies, such as:

However, beware of instant-kill tricks like Squash and Shamrocket, or transformation cards like The Great Zucchini and Transmogrify, as they will get rid of it without activating its ability.

Use instant-kill or transformation cards to remove this zombie without activating its ability. If you cannot use hard removal to get rid of it, use a plant that has at least 5 strength to take him down in one hit.

Then make use of cards that can damage all zombies like Cherry Bomb, Kernel Corn, and Sour Grapes to remove all the Mystery Eggs. You can also Bounce it to stall for time, although this will work against you in a pet deck. 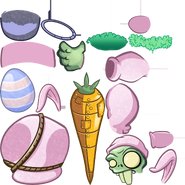 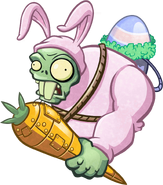 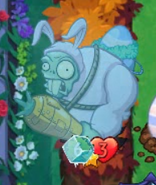 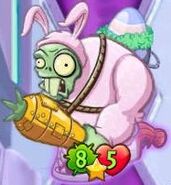 Hippity Hop Gargantuar on the advertisement for The Springening Bundle

Hippity Hop Gargantuar on the advertisement for The Springening Bundle 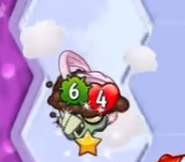 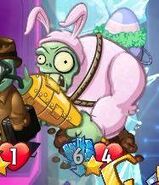 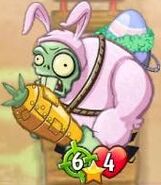 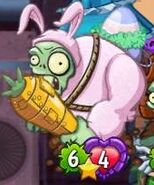