Not to be confused with Electric Currant, a plant in Plants vs. Zombies 2. 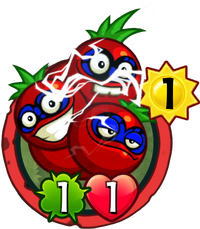 when another Berry does damage.
When played: Conjure a Berry.
These trouble makers are just asking to get grounded.
High-Voltage Currant is an event plant card in Plants vs. Zombies Heroes and a member of the

when a berry card, excluding them, does damage and Conjures a berry card when they are played. Their closest zombie counterpart is Zombie Middle Manager.

They are based on a currant, a member of the genus Ribes in the gooseberry family.

Their name is a portmanteau of "high-voltage current," a powerful current of electricity, and "currant," the real-life plant they are based on.

Their description is a pun on the word grounded, meaning a punishment and a grounded electrical current.

These trouble makers are just asking to get grounded.

This card goes great with any sort of berry deck, as they will not only gain strength when another berry does damage, but they also give you a random berry card when you play them. Having multiple of these in such decks will help you keep up with your cards so you can quickly have lots of high-damage attackers in just a few turns, especially since most Kabloom heroes lack card draw.

Sergeant Strongberry will further enhance their combat prowess, while cards like Sour Grapes and Grapes of Wrath can easily do damage with their abilities, boosting High-Voltage Currant's strength very quickly. Speaking of Sour Grapes, you can damage up to 5 zombies when playing him, causing High-Voltage Currant to gain a massive boost. Captain Combustible can even abuse this with Potted Powerhouse.

Due to the fact that they conjure a berry card, High-Voltage Currant can activate Dino-Roar abilities, as well as that of Captain Cucumber. However, some of these strategies are bound to specific heroes only.

However, you must be aware of their health, since having 1 health means they are easily destroyed by damage. Boosting their health can be very useful, though this is only normally possible when playing as Spudow or Captain Combustible. Also, be careful of Quickdraw Con Man as he will do 1 unblockable damage to you when this card is played.

Here is the list all of the berry cards in the game High-Voltage Currant has a chance to Conjure:

You should destroy this plant quickly because if left alone, they can accumulate a lot of strength very quickly, doing high damage to whatever they hit. Fortunately, they do have very low health, so virtually any removal trick or zombie like The Chickening, Conga Zombie or Bungee Plumber can destroy them, but beware of Berry Blast if you are to use zombies. If they have become a huge threat, Rocket Science, Locust Swarm, or Squirrel Herder can destroy them. Bouncing them is also an option to remove their strength boost, but your opponent can replay them to Conjure another card, which is very likely given their low cost. Quickdraw Con Man is also an option to deter your opponent from just playing them.