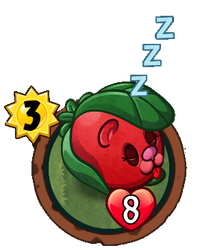 .
Don't poke the beary.
Hibernating Beary is a premium rare plant card in Plants vs. Zombies Heroes and a member of the

. It does not have any traits, and its ability gives it +4

every time it takes damage. Its closest zombie counterpart is Newspaper Zombie.

It is based on the bearberry, a type of dwarf shrub of the genus Arctostaphylos commonly found in northern North America, Asia, and Europe; and a bear, a carnivoran mammal of the family Ursidae.

Its description is a reference to the phrase, "Don't poke the bear."

Hibernating Beary is naturally very bulky, and becomes a heavy-hitting threat when it takes enough hits. Boosting its stats in general benefits Hibernating Beary greatly, as a health boost enables it to take more hits, while a strength boost pressures your opponent into playing a zombie to guard the lane. It is best played against weak zombies like Mini-Ninja to sustain and grow stronger.

Deadly zombie or any other zombie powerful enough to destroy it in one attack. You can boost its strength before it has taken any damage to put your opponent into a dilemma. If left unblocked, it keeps doing damage, and if they play a zombie to block it, it becomes even stronger. If you think Hibernating Beary has gained enough strength, then you may play a Team-Up plant to protect it.

Each Guardian hero has their own strategies with Hibernating Beary. Spudow can use it in conjunction with High-Voltage Currant, Strawberrian and Sergeant Strongberry and playing Lava Guava on its lane to make Hot Lava to boost its strength, Grass Knuckles can make it do bonus attacks when it has a lot of strength to either immediate destroy the zombie in front of it or finish his opponent off, give it the Untrickable trait via Umbrella Leaf to prevent it from getting destroyed by instant-kill tricks, or simply boost its stats even further, and finally, Wall-Knight can heal Hibernating Beary with 2nd-Best Taco of All Time and Geyser, allowing it to take even more damage and gain more strength. As for Citron, though, he would be better off not using this plant unless he needs some more plants that can block zombie attacks. He can, however, use Peel Shield when Hibernating Beary is low on health, which also allows it to clear the lane of the blocking zombie.

If your opponent has played a Trapper Territory lane, you can take advantage of it by playing Hibernating Beary in it to activate its ability and allow it to fight at the same turn at a mere cost of 1 health.

You can also use this with Pecanolith due to its high base health to put your opponent in a dilemma. Either they do not front it and constantly take 8 damage, or they front it and must then keep Pecanolith on the field to keep the damage output low, allowing you to play another high-health threat elsewhere.

However, you may want to watch out for instant-kills like Evaporate and Zombot Sharktronic Sub once it gets hurt, Rolling Stone and Weed Spray due to it not having strength, Rocket Science and Cut Down to Size if it gets too powerful, and Squirrel Herder because of its berry tribe.

Hibernating Beary can wreak some serious havoc, and even make you lose early if unprepared. However, Hibernating Beary's initial stats and ability make it susceptible to Rolling Stone and Weed Spray when it is unscathed, and Rocket Science or Cut Down to Size if it has gained strength, so having said cards in your deck is very useful against it. Locust Swarm is recommended if you have none of the aforementioned tricks. The best counter against Hibernating Beary is

If you don't have a card that can destroy it instantly, destroy Hibernating Beary with as few hits as you can manage, as playing lower strength zombies equal Hibernating Beary taking more hits for the same amount of health, which is very bad against you.

The best strategy, however, is to simply ignore Hibernating Beary. If you don't hurt it, it can't hurt you. Even if your opponent gives it some base strength or plays a damaging Team-Up plant with it, try to take care of it without hurting Hibernating Beary. This also makes it so that one whole lane is occupied.

If Pecanolith is played and Hibernating Beary has not been damaged yet, be careful as it can suddenly do 8 damage. In such a case, be ready with an instant-kill card such as Rolling Stone or Squirrel Herder to remove either of the two threats.

Evaporate and Zombot Sharktronic Sub are also perfect counters to this plant, as they can destroy it instantly when it gets hurt.

Retrieved from "https://plantsvszombies.fandom.com/wiki/Hibernating_Beary?oldid=2348788"
Community content is available under CC-BY-SA unless otherwise noted.