For the Adventure Mode version of this level, see Level 3-5/Nintendo DS version.

Heat Wave is a mini-game in the Nintendo DS and DSiWare versions of Plants vs. Zombies. It is the tenth mini-game within the game and replaces Big Trouble Little Zombie in Level 3-5. Throughout the mini-game, the game limits the player to four Peashooters, four Lily Pads, and two Wall-nuts. They must move the plants around the lawn to defeat the incoming zombies.

Shift your Peashooters around as needed, allocating one row's unneeded defenses toward another, so as to maximize efficiency. For example, if you have a normal Zombie in one row and a Buckethead Zombie in another, drag about three of the Peashooters from the normal Zombie's row into the Buckethead Zombie's row. Remember to make noise into the device's microphone when the word "Shout" appears on the bottom of the heat meter.

As you progress, some Peashooters will get tired and stop shooting as fast as usual. When you next shout into the microphone, these Peashooters will all turn orange and begin firing at an increased rate, sometimes along with others. Again, move Peashooters around as efficiency dictates. Try to conserve your Wall-nuts and save them for tougher Buckethead Zombies and remember that the Zomboni and Gargantuar cannot be stopped by Wall-nuts. Move the Peashooter and blow in the mic, so the Gargantuar's Imp does not eat your Peashooters. If the Gargantuar gets too close, stall him by moving a Wall-nut in front of him and move it away when he lifts his arm to pound indefinitely.

Note: You cannot lose Peashooters, Lily Pads, and Wall-nuts to the heat, and you can replace any destroyed plant with its seed packet dropped by the next zombie to die.

Heat Wave in the trailer
Add a photo to this gallery 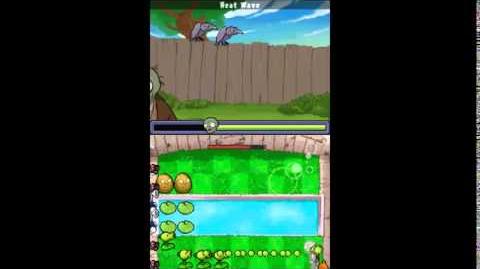 Retrieved from "https://plantsvszombies.fandom.com/wiki/Heat_Wave?oldid=2220107"
Community content is available under CC-BY-SA unless otherwise noted.