This attacks using its

.
He always skips leg day.
Health-Nut is an event plant card in Plants vs. Zombies Heroes and a member of the

. He does not have any traits, and his ability makes the amount of damage he does equal to his health stat.

His name comes from the phrase "health nut," a person who is obsessed with their health. It also serves as a visual pun, as Health-Nut is depicted as a Tall-nut in shape lifting a barbell with small Wall-Nut-like nuts for weights.

His description mentions the phrase "skip leg day," which is jokingly used when someone does not work their legs out, resulting in their upper body being disproportionately bigger than their lower body. This is a reference to how Health-Nut does not have any legs, thus being unable to work them out.

plant, which is above average stats for a 3

card. However, his ability causes him to lose strength whenever he takes damage, so always keep an eye on his health. On the other hand, this also means that the more health Health-Nut has, the more damage he does. It is advisable to play cards that boost health such as Smackadamia, Steel Magnolia, and Photosynthesizer, which not only increases his health, but also his damage output. Grape Responsibility is a very notable trick for Health-Nut due to its extremely low cost, doubling its health which effectively doubles its strength.

If you don't have any of these, you will have to play cards that boost both stats, such as Fertilize, even though the strength boost is practically meaningless. If Health-Nut is damaged, play healing cards like 2nd-Best Taco of All Time to restore his health so he can do a more powerful attack. You can also protect him from further damage by shielding him with tricks like Root Wall (only available to Citron and Grass Knuckles), playing a Team-Up plant like Wall-Nut in front of him, or moving him out of harm's way with Gardening Gloves.

Since this is also a nut, you can play Mirror-Nut to prevent your opponent from hastily hurting him, or Smackadamia for the aforementioned health-boosting synergy.

However, you must be really careful against

Hearty heroes, as Health-Nut technically has 0 strength, making him vulnerable to the aforementioned instant-kill tricks.

You must be really careful against this as the more health he has, the more damage he does when he attacks. Fortunately, this also means that he is easier to deal with if he is low on health.

As any Hearty hero, you can play Rolling Stone or Weed Spray to destroy Health-Nut instantly, as long as he has 2

or less. If you are playing as a

Beastly hero, Squirrel Herder can destroy Health-Nut instantly since he is a nut plant. In case Squirrel Herder is unavailable, resort to using Locust Swarm instead. If Health-Nut is damaged, you can try a sneaky way by using Evaporate on him, though only Electric Boogaloo and Immorticia can use this. Beastly heroes can also use stat-lowering tricks such as Nibble on Health-Nut to lower his health and make his strength weaker.

As for other heroes, you can aim to damage him as much as possible using damaging tricks such as Bungee Plumber or by having a zombie on the same lane as Health-Nut do a bonus attack, which not only damages him, but also reduces his damage output. 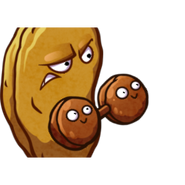 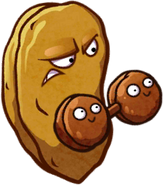 tinted gray due to a glitch

Crazy Dave explaining how Health-Nut works to the player

Health-Nut being the featured card in the menu for the April 11th, 2017 Daily Challenge (which is the very first daily challenge)

Health-Nut being the featured card in the menu for the April 15th, 2017 Daily Challenge

Health-Nut on the advertisement for the Early Access Pack

Health-Nut on the advertisement for the Early Access Bundle

Health-Nut on the advertisement for the Early Access Bundle 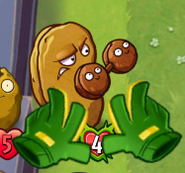 Gardening Gloves being played on Health-Nut

Health-Nut on the advertisement for the Event Rewind Bundle

Health-Nut on the advertisement for the Weekly Events

Frosty Mustache being played on Health-Nut

Health-Nut being featured in the April 28th, 2020 Daily Challenge