Not to be confused with Healer Zombie from Plants vs. Zombies 2.

None
The Heal Zombie chases after you if you're injured. He looks scary, but he's just trying to help!

None
The Heal Zombie chases after you if you're injured. He looks scary, but he's just trying to help!

He is a Spawnable Zombie released in the Legends of the Lawn DLC. He follows damaged zombies and heals them with his manual heal station strapped on his back.

He heals about 12 health per second (3 health, 4 times per second). He attacks by whacking his flag and each whack deals 15 damage. The Heal Weed is his plant counterpart.

The Heal Zombie chases after you if you're injured. He looks scary, but he's just trying to help!

This zombie is one of the most useful spawnable zombies in the game as its healing can be invaluable in a team with few healing Scientists as they can step in as team healer. Then tend to avoid most plant fire as they will spend most of their time hiding behind the person they are healing.

However, they cannot heal themselves so can easily die if the get snipped while chasing a healing target or if they run out of zombies to heal and try and charge the plants. They are very effective on the last stage of Seeds of Time at healing the zombies pushing the boot.

If you see this zombie, try and take it out quickly. Its healing can make it very hard to defeat the zombies it is healing and lots of times is very hard to hit. However, its health isn't very high, and if caught out in the open it can be very easily dealt with. 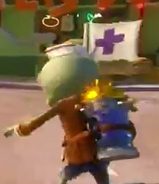 The back of a Heal Zombie 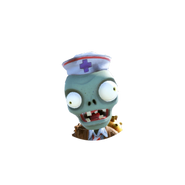 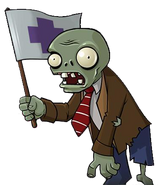 Heal Zombie in the Plants vs. Zombies art style (Note the missing hat and healing station similarly to the Garden Warfare icon)