Heal Flower is a Rare Spawnable Plant and ability of the Sunflower in Plants vs. Zombies: Garden Warfare and Plants vs. Zombies: Garden Warfare 2. It heals nearby players by dropping sundrops that they can pick up. It appears to be identical as a Marigold, albeit with yellow petals and not being able to produce any coins. The ability version will despawn after 30 seconds, but the potted plant version will not fade on its own. Its alternate abilities are the Dark Flower, which attacks zombies instead of healing plants, and the Rainbow Flower, which functions exactly the same as the Heal Flower but has glowing rainbow colored petals and rainbow colored sun drops which dropped one at a time at a faster rate. The Rainbow Flower was sold by Rux's Bazaar in the Trials of Gnomus DLC in Garden Warfare 2. It takes 45 seconds to recharge. The Heal Flower can be seen as the plant equivalent to the zombie's Zombie Heal Station. It also has a zombie counterpart known as Dr. Heals.

It can be planted by any member of the plant faction if there are any available vacant pots and if he/she has gained any Heal Flower stickers. The Sunflower has the ability to spawn one.

A Heal Flower for Sunflower's ability has 275 health. A Spawnable Heal Flower has less than or equal to 102 health.

The Heal Flower is ideal to have around if your team lacks a Sunflower. It will provide health but be sure to protect it from zombies since the Heal Flower is defenseless on its own. In Garden Ops, when the plants must escape after the tenth wave, there will be a single flower pot in the landing zone. This flower pot is meant to contain a Heal Flower so be sure to place one in it because it will be needed while fending off the zombies from the landing zone.

There are three effective ways to protect it. One, as the Cactus, put some Potato Mines around the Heal Flower so if any non-ranged zombies try to bite it, they will get blown up. Two, also as the Cactus, put Tallnut Battlements, or Iron Maidens, around the Heal Flower. This will protect it from ranged zombies. And finally three, as the Chomper, put some Spikeweeds around the Heal Flower, as it will act in a similar way to putting Potato Mines around it which, at the tradeoff of dealing less damage, can destroy the armor of some tougher zombies. It can also heal itself, although this is unreliable, but if you have no Sunflowers on your team, it can help out. If it is only slightly damaged, you may be able to count on this. 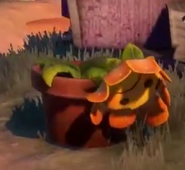 A vanquished Heal Flower
Add a photo to this gallery

Sticker
Add a photo to this gallery