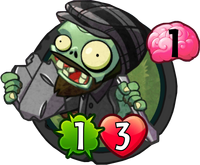 When a Zombie is revealed from a Gravestone, that Zombie gets +1

.
His epitaphs have been published on headstones around the world.
Headstone Carver is a premium uncommon zombie card in Plants vs. Zombies Heroes and a member of the

. He does not have any traits, and his ability gives every zombie that comes out from a gravestone +1

, including those that are affected by In-Crypted's, Mixed-Up Gravedigger's, Graveyard's, or Cursed Gargolith's ability. This ability stacks with each Headstone Carver on the field and persists until all Headstone Carvers are removed from the field.

His epitaphs have been published on headstones around the world.

Since he has a lot of health for such a cheap zombie, he can be hard to destroy on the first few turns. But what makes him shine is his ability to give Gravestone zombies a small boost upon being revealed. Therefore, play him early on, then try to play as many Gravestone zombies as possible. Additionally, you can boost him to keep him alive.

He can be combined with Mixed-Up Gravedigger to boost all zombies on the field. However, this can only happen if Headstone Carver is the first zombie to be revealed, and any zombies revealed before he is cannot be boosted by him, as he is technically not on the field if he is hiding in a gravestone. To avoid this, play him after you play Mixed-Up Gravedigger. Graveyard is also a good combo with Headstone Carver, as you can give any zombie a +1

boost, even after Graveyard is overridden by another environment.

Headstone Carver synergizes well with any Sneaky hero, but especially with Impfinity. A notable example is Exploding Imp, as he can keep Exploding Imp alive for another turn after attacking, or at least after taking 1 damage. Other cards such as Newspaper Zombie, Conga Zombie, and Jester also do well with Headstone Carver. As a small bonus, Impfinity has access to In-Crypted, which allows him to hide a zombie in a gravestone and boost that zombie a little bit if Headstone Carver is still in play.

Since he is also a professional zombie, letting him get hurt will boost Zombie Middle Manager, and he can also be used to Evolve Jurassic Fossilhead as early as turn 2. However, these combos are only normally possible as Neptuna.

Since this zombie's ability revolves around Gravestone zombies, you also need to watch out for Grave Buster, Blockbuster, or Grave Mistake as they can get rid of zombies hiding in gravestones, rendering Headstone Carver's ability useless.

Because Headstone Carver is a mustache, he can be used with Mustache Waxer to boost his health and get extra brains. This combo is only normally possible as Super Brainz or Huge Gigantacus.

Because Headstone Carver has 3 health, he can be hard to destroy on the first turn, since he can survive a lot of 1-cost plant cards or tricks, such as Party Thyme, Shellery, Power Pummel, Sunburn, etc. You can destroy him instantly for the cost of 1 sun with Bonk Choy, Meteor Strike, Precision Blast, Tater Toss, Primal Potato Mine, or Devour. Instant-kills like Squash, Whack-a-Zombie, Chomper, or Lawnmower should counter him easily. You should also have some cards that can remove gravestones, notably Grave Busters, Grave Mistakes, and Blockbusters with you, just in case Headstone Carver gets out of control. This way, you can prevent him from boosting revealed zombies.

Retrieved from "https://plantsvszombies.fandom.com/wiki/Headstone_Carver?oldid=2363667"
Community content is available under CC-BY-SA unless otherwise noted.