When you play a Dancing card, do 2 damage to the Plant Hero.

Dancing Evolution: This gets +2 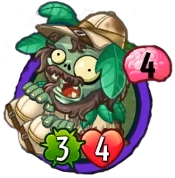 Headhunter is a triassic legendary zombie card in Plants vs. Zombies Heroes, and a member of the

. He does not have any traits, and his ability does 2 damage to the plant hero every time a dancing card is played, while his Dancing Evolution ability gives him +2

His name is based on the real meaning of headhunter, a person who participates in the act of taking and preserving a person's head after killing the person.

His description is a reference to Disney World's Jungle Cruise, where a shrunken head-dealer named Sam offers the same deal with the same advice.

Headhunter is a great legendary that shines in dancing decks. His ability does direct damage to your opponent, which is effective in many situations. He synergizes greatly not only with the normal dancing synergy cards, but also with Dance Off, Template:PvZHLink, and Template:PvZHLink. And unlike Flamenco Zombie's ability, his can activate indefinitely and doesn't require the dancing zombies, which tend to have low health, to survive.

While that is good enough, his Dancing Evolution ability is what makes him truly legendary. Not only does it give him a good stat boost that turns him into a zombie with above average stats, which is quite rare for even a legendary zombie, but also gives him a trait that makes his normal ability even deadlier, as your opponent will not be able to block any of them.

The only issue with his Evolution ability is that many dancing zombies playable by turn 3 have low health, and are unable to survive that turn. However, these following zombies are an exception, and are particularly good for it:

Or, you can wait until turn 5 and then play a 1

Each hero has their own way to make good use out of Headhunter.

Headhunter is one of the most dangerous zombies in a dancing deck, and will finish you off, or at least heavily damage you if you don't prepare well.

Your opponent will attempt to play this as soon as they can, which is turn 4 without the help of Flag Zombie. Fortunately, Headhunter can't activate his ability when played on turn 4, unless your opponent blocks and gets Dance Off. You can take the opportunity and use instant-kills, damaging cards, or strong plants to destroy him. But since your opponent will Evolve him if they can, you will need something strong to destroy, or at least severely hurt him during said turn, because if you don't, Headhunter will strike back with lots of

Bullseye damage. If Headhunter is played later on in the game, you will have no choice but to take some damage.

It is best to destroy any dancing zombies on the field to stop Headhunter from Evolving. While that isn't hard to do since many dancing zombies have low health, there are certain zombies that are hard to destroy, such as Jester or Synchronized Swimmer, so it is recommended to carry some Berry Blasts or Template:PvZHLinks if you can. However, Headhunter is still a threat even if he hasn't Evolved, so you should never underestimate in all circumstances.

Kabloom hero, you can play heavy stat-boosting cards to at least cause an exchange. Mega-Grow heroes can also use bonus attacks.

Smarty heroes can Bounce Headhunter, but note that

Freezing won't be very effective unless Winter Squash is on the field.

His ability can be redirected by Soul Patch, saving you a lot of trouble, but that is a late-game strategy. This strategy will also be ruined if Headhunter gets

Removing any support zombies or environments can also help you deal with Headhunter, examples being Flag Zombie, Laser Base Alpha, and Binary Stars.

Headhunter's statistics after being Conjured by Frosty Mustache 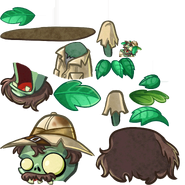 Headhunter's statistics after being Conjured by Buried Treasure 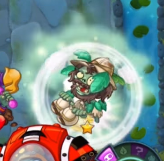 Evolved Headhunter on the field 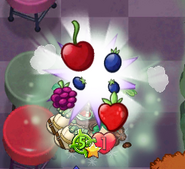 Berry Blast being used on Headhunter 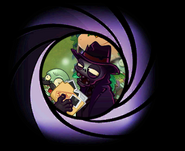 Retrieved from "https://plantsvszombies.fandom.com/wiki/Headhunter?oldid=1959268"
Community content is available under CC-BY-SA unless otherwise noted.