Heals all plants and removes all negative effects

The Hazelnut line (榛果系; pinyin: zhēnguǒ xì) was a Class A

Pistachio and Hazelnut attacked by firing laser beams, while Hazelnut Ball attacked by jumping off of its base and throwing multiple hazelnuts.

Each member of the Hazelnut line was based on a nut of some sort.

Pistachio, as the name entails, was based on the pistachio, a member of the Anacardiaceae family whose seed is commonly consumed as food.

Both Hazelnut and Hazelnut Ball were named after the hazelnut, a member of the Corylus family commonly used in confectioneries, namely chocolates and chocolate truffles.

However, despite being named "Hazelnut", Hazelnut bares more resemblance to an acorn than a hazelnut, and Hazelnut Ball also appears to more closely resemble a Pinecone.

Can be used in the center tile's to purify the negative effects, and help some plants. 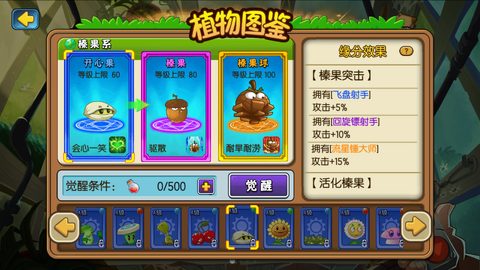 After unlocking the Hazelnut line, additional puzzle pieces could be used to upgrade it, which increased its stats and ability LVs.

Hazelnut line stats would be increased if these specific plants were unlocked. 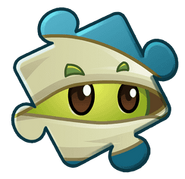 Hazelnut line Puzzle Piece
Add a photo to this gallery

Pistachio about to attack 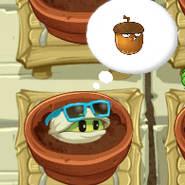 Pistachio which can be upgraded to Hazelnut (old)

Pistachio's sprites and textures
Add a photo to this gallery

Hazelnut attacking
Add a photo to this gallery 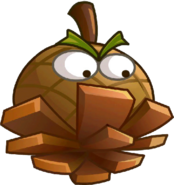 Hazelnut Ball's sprites and textures
Add a photo to this gallery

Retrieved from "https://plantsvszombies.fandom.com/wiki/Hazelnut_line?oldid=2351826"
Community content is available under CC-BY-SA unless otherwise noted.