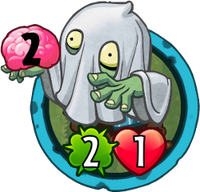 When destroyed: Gain a Haunting Ghost.
He doesn't realize he would look even scarier without the spooky ghost costume...
Haunting Zombie is a premium uncommon zombie card in Plants vs. Zombies Heroes and a member of the

. He does not have any traits, and his ability adds a Haunting Ghost into the zombie hero's hand when he is destroyed, unless the zombie hero has over 10 cards in their hand.

In the boss battle of the mission Haunting at Morbid Manor, Immorticia starts with three Haunting Zombies on the second, third, and fourth lanes.

His original description is a nod to Cattail's Almanac entry in Plants vs. Zombies, as "refuses to be pigeonholed" is also the last line in its entry.

He doesn't realize he would look even scarier without the spooky ghost costume...

Haunting Zombie's ability to return can be a huge help. You can use him to put pressure on your opponent early on, as they will have to face Haunting Ghost once they destroy Haunting Zombie. And since he is essentially two zombies packed into one card, he can also be used to conserve space in your deck for more powerful and useful cards for later; Immorticia's trick deck and The Smash's late-game (primarily Gargantuar) deck are good examples of decks that would welcome Haunting Zombie. Electric Boogaloo's Valkyrie/Frankentuar deck also applies, although said deck needs swarming cards instead of powerful late-game ones. And finally, since he Conjures a card, he can synergize with Dino-Roar zombies if your deck lacks ways to draw cards. Dr. Spacetime can also make Haunting Ghost cost less due to him being Conjurable by Haunting Zombie. This is provided you play as Brain Freeze.

But other than that, this zombie has low stats and no tribe synergy other than being Conjurable by Haunted Pumpking, so he becomes less useful in the late game.

Due to his low health, anything that does damage can destroy him. Plants with the Splash Damage trait such as Lightning Reed, and tricks like Berry Blast, Scorched Earth, and Water Balloons can effectively deal with him, although you need to repeat the procedure to completely destroy him as he will return.

Retrieved from "https://plantsvszombies.fandom.com/wiki/Haunting_Zombie?oldid=2296218"
Community content is available under CC-BY-SA unless otherwise noted.