When played: The Zombie player Conjures a Monster.
For generations, the Pumpkings have kept their realms safe from a terrible curse. Tonight, they finally face their greatest fear.
Haunted Pumpking is an event plant card in Plants vs. Zombies Heroes and a member of the

He does not have any traits, and his ability Conjures a monster card for the zombie hero when he is played, unless they have at least 10 cards in their hand already.

He was available in the Haunted Gourd week.

He is based on a pumpkin, a type of squash of the family Cucurbitae.

For generations, the Pumpkings have kept their realms safe from a terrible curse. Tonight, they finally face their greatest fear.

Haunted Pumpking is an amazing aggro card due to his high strength for his cost. In fact, he is the only plant that can destroy certain turn 1 threats like Cat Lady and Planetary Gladiator.

However, in exchange of that, this plant lets your opponent Conjure a monster card, giving the zombie hero a card advantage and possibly a powerful card that can turn the tables, such as Quickdraw Con Man, Gizzard Lizard and Cryo-Yeti, but it may also conjure a bad card like Deep Sea Gargantuar or Haunting Zombie, which means the conjure may not help your opponent.

He also has low health, which makes him vulnerable to 2

zombies like Dog Walker or tricks that do at least 2 damage such as Bungee Plumber. However, as plants play second, the only worries are Dog Walker and Bungee Plumber. Wall-Knight can take this further by providing Haunted Pumpking with Guardian Class' health boosts.

If you want to use this card, you should use him for aggro, as you want to beat your opponent before they can play cards conjured from Pumpking. You can also play him when your opponent's hand is full, nullifying his hindering ability. However, you would have to go pretty late into the game to do that, which is not feasible for an aggro deck.

Also, be wary of playing this if Dr. Spacetime is on the field, as the Conjured card will cost 1

less, but it still shouldn’t be that concerning. Playing Haunted Pumpking while there are any Dino-Roar zombies on the field is also a very bad idea, as his ability counts as your opponent drawing a card, meaning that the aforementioned cards will activate their Dino-Roar abilities, but most Dino-roar cards appear after turn 4, so they shouldn’t be a concern most of the time.

Statwise, this plant is very powerful as he does massive damage at a very cheap cost. On the bright side, you will get a free monster card. While the card can be as weak as Haunting Zombie or Haunting Ghost to as powerful as Quickdraw Con Man or Gizzard Lizard, the main problem is that most monsters are too expensive to play before your defeat.

If you are against any

Solar hero with aggressive strategy decks (especially Solar Flare, whose Kabloom class is also suited for rushes), it is very likely that they will have Haunted Pumpking, and you'll have to rush them down before they can defeat you.

Since he has low health, you can use tricks like Bungee Plumber or Electrobolt, or certain zombies like Dog Walker, Witch's Familiar, and Octo-Pult to easily destroy him. If you really need to, Rocket Science and Alien Ooze are another option, but it would be for a desperate measure, as you would be using 3 brains to destroy a 1 sun plant, unless the plant hero plays a lot of boosting cards on him.

You can also have any of the Dino-Roar zombies on the field to make the opponent think twice before using him as if they do, their Dino-Roar abilities will activate. However, due to them appear mostly after turn 4, you may not get them on the field in time unless the opponent does not have them.

For easy reference, here is the list of zombies Haunted Pumpking can Conjure: 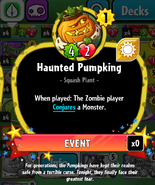 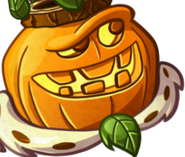 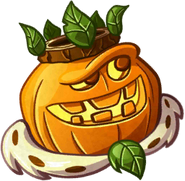 Haunted Pumpking on an advertisement for the Early Access Bundle

Haunted Pumpking on the advertisement for the Weekly Events

Haunted Pumpking on an advertisement for the Weekly Events

Two Haunted Pumpkings on a lane due to Pair Pearadise's ability

A notification about Haunted Pumpking

Haunted Pumpking on the advertisement of the Trick or Treat Pack

Haunted Pumpking being featured in a Daily Challenge 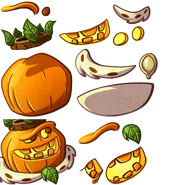