Hard-nut was the VIP version of the Wall-nut in Plants vs. Zombies Adventures. The player got him after completing Dire Spires level 5.

He is based on Wall-nut and a construction worker, a tradesman, laborer, or professional employed in the physical construction of the built environment and its infrastructure.

His name is a portmanteau of "hard hat," a type of helmet predominantly used in workplace environments such as industrial or construction sites to protect the head from injury due to falling objects, impact with other objects, debris, rain, and electric shock; and "Wall-nut." His Facebook page description mentions Sunflowers.

Hard-nut's rough exterior belies his soft, squishy insides. "I don't whistle at the Sunflowers, like some other plants," he says gruffly, scratching his belly against a nearby post. "It's disrespectful and objectifying. Also I can't whistle." 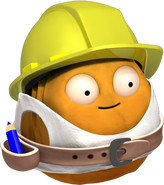 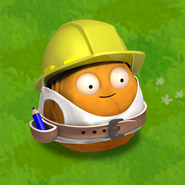 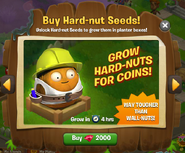