For the version in Plants vs. Zombies: All Stars, see Hammer Zombie (PvZ: AS).

Hammer Zombie is known as the "Zombie Whirlwind". He is famous for being able to quickly spin his hammer without feeling dizzy.

Waves his hammer in the air and then attacks the frontal area.

PvP Mode
After Sledgehamer Zombie watched "The Avengers", he felt that the Thunder God "Thor" was very handsome, and just like that, he was inspired to be a hammer-wielding guy, no wait - a hammer-wielding zombie guy!
Hammer Zombie (锤子僵尸; pinyin: chuízi jiāngshī) is a zombie in the Chinese version of Plants vs. Zombies 2. He is slightly slower than a Basic Zombie and he spins relentlessly in order to deflect projectiles such as peas and boomerangs.

After spinning for some time, he becomes tired and vulnerable to anything. A Kongfu Zombie who manages to touch a Weapon Stand that contains a hammer in it will transform into this zombie.

Hammer Zombie absorbs 600 damage per shot and does not degrade.

Once this zombie has set foot on your lawn or whenever a Kongfu Zombie manages to transform into this zombie, you should get ready, for he will block a wildfire of straight projectiles that will be reflected back to your plants immediately. Use an Iceberg Lettuce to temporarily immobilize the zombie, but be quick, or he will spin aggressively to nullify all the straight projectiles shot at him. Potato Mines, Spikeweeds, and Spikerocks will also work.

You can also use other explosive plants. Melon-pults and other lobber shot plants on the other hand can shorten his stay on the lawn so long, as there are no other zombies to interfere with him. Like Jester Zombie, Laser Bean, Fume-shroom, and Snapdragon can damage him, however the best choice of these three is Laser Bean, as it can shoot through all the zombies in a row. If you are going to choose Snapdragon as a counter for him, make sure that there are not any Torch Kongfu Zombies or their monk variation because Snapdragon can relight their torches. In short, treat this like a Jester Zombie with the same weakness as Excavator Zombie. 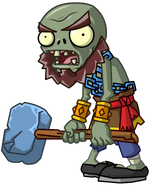 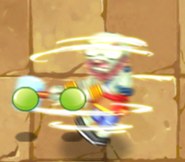 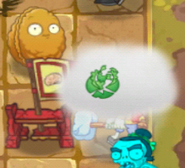 A Weapon Stand transforming a Zombie into an Hammer Zombie 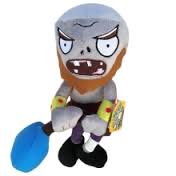 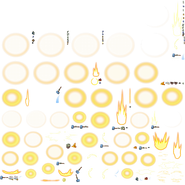