When destroyed: All Bananas in your hand get +1

.
"Have you met my better half? She's around here somewhere."
Half-Banana is a triassic uncommon plant card in Plants vs. Zombies Heroes and a member of the

Mega-Grow class. It can also be made by Banana Split. It costs 1

. It does not have any traits, and its ability gives all banana plants in the plant hero's hand +1

when it is destroyed.

It is based on the banana, an edible fruit (botanically a berry) produced by several kinds of large herbaceous flowering plants in the genus Musa, specifically one that has been peeled and sliced in half longitudinally. The fact that it is half a banana refers to Banana Split's ability, which literaly involves splitting in half upon destruction.

Its name is a combination of "half," referring to its appearance, and "banana," the real-life plant it is based on.

The term "better half" in its description is used to describe the person somebody is married to, or a boyfriend or girlfriend. It is also a reference to Banana Split's ability to make two Half-Bananas.

"Have you met my better half? She's around here somewhere."

Half-Banana has decent stats for a plant that costs 1 sun. You can give it stat boosts with your Mega-Grow cards, but it would be better to treat it as a temporary fighter as there are better plants to spend them on. The downside to Half-Banana is that it has no synergy aside from being Conjurable by Banana Peel. This means that it is less effective on its own than Morning Glory which has the same stats, a more reliable ability, and better tribe synergy.

Its ability, while it does give a head start to your bananas, is very situational and has limited use. Aside from the fact that there are very few banana cards in the game and the boost is minuscule, the main issue is about gathering enough bananas in your hand for its ability to be worthwile. The two main banana suppliers, Banana Split and Banana Launcher, do not help with this issue as Banana Split makes Half-Bananas which don't count, while Banana Launcher only adds Banana Bombs, which are tricks and are thus unaffected by its ability.

Therefore, make sure to have lots of card draw and many banana plants to put this plant to good use. Captain Combustible and Green Shadow are the best heroes to use this, as they have the most banana plants out of all heroes.

Due to its low stats, Half-Banana should not give you much trouble alone. Almost any zombie should be able to destroy it, while Weed Spray and The Chickening are great at handling Half-Bananas made from Banana Split. Its ability is weak, but may give you a hard time once your opponent starts playing boosted bananas, so keep that in mind. 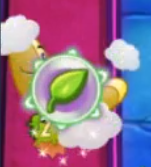 Plant Food being played on Half-Banana 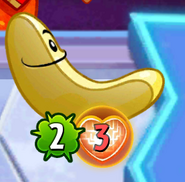