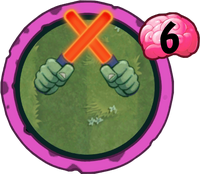 Copter Commando Imp.
Refuses to fly over water due to a severe case of aquaphobia.
Hail-a-Copter is a premium rare zombie trick card in Plants vs. Zombies Heroes and a member of the

to play, and its ability makes a Copter Commando on a selected lane. Its closest plant counterpart is Nut Signal.

Refuses to fly over water due to a severe case of aquaphobia.

zombie) and Teleport (a 1

trick) in one card, although you cannot cycle the deck with this one as this trick does not draw a card. While the Copter Commando is decidedly under-statted for its ability, the card's element of surprise can help turn the tide of battle in your favor. Additionally, it can activate Interdimensional Zombie's ability, transforming the latter to a random 3-brain zombie, but Interdimensional Zombie is outclassed by then, even if he has transformed.

This trick can be used on a poorly defended lane to snipe a dangerous plant, or on an empty lane to almost guarantee direct damage to the plant hero. As a science Imp zombie, the Copter Commando made also gains full benefit from Zombot Drone Engineer and Gadget Scientist, as well as Toxic Waste Imp and Imp Commander. However, the latter combo is normally available only to Super Brainz and Huge-Gigantacus.

Since this is a trick that makes a zombie, Rustbolt can play this trick earlier if Zombology Teacher is on the field, while Professor Brainstorm can use this to activate Unlife of the Party's ability.

While Copter Commando costs 1 brain less than this, this card makes a Copter Commando during the Zombie Tricks phase which is strategically different from straight out playing one, so it it not completely outclassed.

Because Hail-a-Copter is a trick, Brainana can easily counter it. Dark Matter Dragonfruit and Forget-Me-Nuts can also be used to hinder it from being played. You can also play Gravitree to relocate Copter Commando, ensuring the safety of you or your plants or have Corn Dog so that Copter Commando will always be fronted by a plant, absorbing the heavy damage from you. Instant-kill tricks such as Squash, Lawnmower, and Doom-Shroom can also deal with Copter Commando the next turn. Sizzle is a viable alternative if you don't have access to the aforementioned tricks, because it is capable of destroying Copter Commando due to it doing 5 damage, provided its health isn't boosted. Otherwise, there is no real counter to this trick, and if it is played on an unguarded lane, you can only hope that the Super-Block Meter will block its powerful attack. Avoid using all your cards and having nothing to block Hail-a-Copter, because you can lose the game easily. It is also best to keep your health above 6 so it can't instantly defeat you. 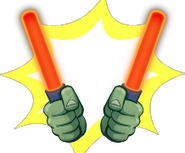 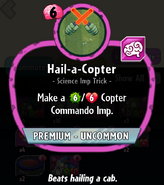 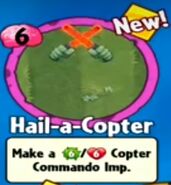 The player receiving Hail-a-Copter from a Premium Pack 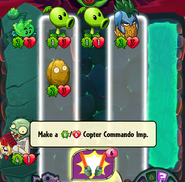 The free lanes that the Hail-a-Copter card can be played on, excluding the aquatic lane