I need my TIME MACHINE!
Gunpowder Devil is a conjectural name for this article.
If you know the official name or have a better name or
translation for it, please contact a wiki administrator to change it.

Throws out all kinds of explosives and zombies.

He had a bad habit of littering when he lived and would continue that even long after his death.

Gunpowder Devil (火药魔头; pinyin: huǒyào mótóu) is a boss from Kongfu World in the Chinese version of Plants vs. Zombies 2. Before the 1.8 update, he was fought in Day 16, but now can only be battled once per day in the Daily Challenge. He summons all Kongfu variant zombies with the exception of the Imp Monk and the Blade-Wielding Hero.

A simple strategy for the Rank 1 version of the boss is to place 2 Torchwoods (Costumed) directly in front of the boss, and (that is, the middle and the lane directly below him, and behind him) Rank 2 Peashooters every tile behind the Torchwoods. Start the level, then apply Plant Food to the 2 Torchwoods as well as one of the Peashooters. If you have extra Plant Food, use it on the Peashooters. This should deal enough damage in a short enough amount of time to stun the boss right before he attacks. This will repeat 3 times, and the boss will be defeated. However, this will not work to higher ranked bosses due to higher amounts of health not allotting enough time for Peashooters to attack. However, if you have Rank 3 Peashooters, you can beat the Rank 2 boss this way. 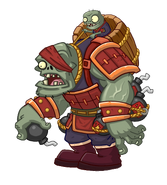 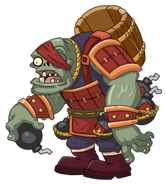 HD Gunpowder Devil without its Imp 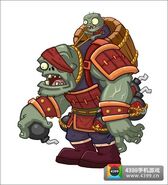 Dropping bombs on his feet upon defeat

A very effective way of dealing with the Gunpowder Devil 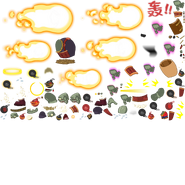 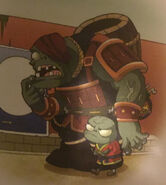 Retrieved from "https://plantsvszombies.fandom.com/wiki/Gunpowder_Devil?oldid=2361627"
Community content is available under CC-BY-SA unless otherwise noted.