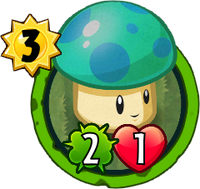 When played: Another Plant gets +2

.
She's always bringing out the best in others.
Grow-Shroom is a basic common plant card in Plants vs. Zombies Heroes and a member of the

. She does not have any traits, and her ability gives a selected plant, excluding her, +2

when she is played. Her closest zombie counterparts are Loudmouth and Hover-Goat 3000.

She may be based on the plant in Plants vs. Zombies with a similar appearance.

Her name is a combination of "grow," referring to her ability, as gaining stats are the same as "growing bigger" in this game, and "mushroom," the real-life fungus she is based on.

She's always bringing out the best in others.

Grow-Shroom herself is pretty mediocre, having low stats compared to the other 3-sun plants. And her stat-boosting ability, while decent, is outclassed by Fertilize. However, Grow-Shroom is not fully inferior to any of these and has her place to stand, having both elements of a fighter and a stat-booster, although her role as a fighter is the more prominent part of her. Grow-Shroom can block a glass cannon's attack from hurting a valuable Team-Up plant or you, and since her strength isn't that bad, she will be able to put an end to most of them. She is also able to serve as a fighter in Captain Combustible's mushroom swarm with Buff-Shroom and Punish-Shroom and reactivate her ability via Rescue Radish as Green Shadow. All of these cannot be achieved with Fertilize.

Other than that, do not play Grow-Shroom by herself, since she is not able to boost herself. Avoid playing her in Total Eclipse either, as Total Eclipse's ability will activate before Grow-Shroom's, destroying her before she can activate her ability.

Grow-Shroom shouldn't be hard to destroy due to her low stats; common early-game removal cards like Nibble and Bungee Plumber are able to destroy her. However, her ability is the more dangerous side of her, being able to boost another plant to a dangerous level. Therefore, removing the boosted plant should be of higher priority for you, because as mentioned before, Grow-Shroom herself doesn't pose much of a threat.

It is highly recommended not to Bounce this plant, as your opponent can play this again, which can boost another plant. The only exception is if you are going to be defeated otherwise, or you can win from doing that.