Defeat a normal Roof level without using any Catapult Plants.

Grounded is an achievement unlockable on the PC, Nintendo DS, PlayStation Vita, Nook, Android, and iOS versions of Plants vs. Zombies. In order to complete this achievement, the player must complete a regular roof stage level without using any lobber plants. It is worth ten points on Game Center.

It is called Unsiege Mentality in the Nintendo DS version.

The word "grounded" refers when an aircraft is removed from flight service or when people (especially children) are not allowed to socialize or do any activities as a punishment.

The Fume-shroom with the Coffee Bean is essential to most strategies, as it ignores the roof's angle. The best way to get it is on Level 5-1 on Quick Play. To get it, you should pick the following (up to eight slots). It is also a good idea to have Roof Cleaners purchased.

As the achievement states, you cannot use catapult plants (Cabbage-pults, Kernel-pults, or Melon-pults, let alone Cob Cannons and Winter Melons). If you have one of them, you cannot achieve this. It is not very different from any other level, so it can be easy. Start planting your Sunflowers first and then you will see a Zombie. It will step on the rake and it will die. Another one will come, so use a Peashooter or a Repeater to shoot it down.

Plant four Umbrella Leaves to defend your Sunflowers from Bungee Zombies and later, when you have a lot of sun, use the Gloom-shroom and Garlic, because the Gloom-shroom is technically cheaper and more efficient than a Threepeater. Then, replace the five Peashooters or Repeaters with Sunflowers. Then, when the Garlic is damaged, since it cannot be repaired by the Wall-nut First Aid, use your shovel and then replace them, or let them finally get eaten, but if a Flower Pot gets eaten with one bite after a Garlic gets eaten, put a Flower Pot on a space where a zombie ate it.

Note: This achievement cannot be earned by completing Level 5-5 as it is a bonus level in which no achievements can be earned, even though this level does not have lobber plants.

First, build up Sunflowers and use Potato Mines and Squashes to save the sun, until you can afford Fume-shrooms, and use Umbrella Leaves to cover every 3x3 square to protect yourself against Bungee Zombies. Use Pumpkins to protect the front Fume-shrooms from Conehead Zombies.

If you have more slots, use anything you want that is not a lobber plant. Plant a column of Sunflowers. Use Squash or Potato Mine for the first few zombies. Plant three columns of Fume-shroom and wake them up. If there are Bungee Zombies or Catapult Zombies, use Squash or Jalapeno.

This strategy is quite simple. You can try this strategy on level 5-1 whether or not you are replaying.

If replaying, also get:

Start by planting Sunflowers (aim for two rows, but save space for Umbrella Leaves if you have it). When the first Zombie comes, he will step on the Garden Rake and die. When the second zombie comes along, use a Potato Mine on him.

Remember that Potato Mines take around 15 seconds (approximately three squares for a normal zombie) to pop out of the ground, so plant them early. When the next zombie comes along, depending on the circumstances, you may usually be able to use another Potato Mine on him.

If you are playing it a second time, you can use the Imitater Potato Mine (or the Squash, but the Potato Mine is cheaper) on the zombie after that. Keep repeating this process until you find these instant kills are still recharging while zombies are coming. When that happens, plant your Repeaters.

It is actually possible to complete this achievement on the first time, select these plants:

If you got extra seed slots select other plants that could be useful.

Now you have to do this formation:

This method is very easy to do and gains a reputation for being able to horde sun, and possibly get the Sunny Days achievement. This is best done on 5-3, but you could do it in 5-1 too.

Note: You can get Flower Power too if you add an extra Sunflower in row three.

Fill in the rest of your empty seed slots with other useful plants that aren't lobbed shot. It is recommended to do this level on 5-1, if possible, because it is the easiest roof level.

In the beginning of the level, plant a Sunflower in the top left corner of the screen. After enough sun has been collected, plant another Sunflower right under it. You should be able to plant one more, and if you can, go ahead.

Try to plant as many Sunflowers as you can, going in all the rows, but don't go past the third column. When the first zombie comes, plant a Peashooter in the fifth column of the roof, on the same row.

Continue to do that to all of the zombies. If a stronger zombie comes, such as a Conehead Zombie, dig up your Peashooter in that row (if there is one), and plant a Snow Pea. The zombies shouldn't get any stronger than that, but if you need, plant a Repeater or Gatling Pea.

The largest threat will be the Bungee Zombies, but they will most likely take your Sunflowers, which are cheap and easy to replace. If a row of zombies gets to tough for you, your fourth column should be open and you can plant a Jalapeno.

(It is recommended to do this on level 5-1) You will need the following plants:

Besides this pick anything else you think might help like the Umbrella Leaf, Squash, or Jalapeno (the Garden Rake is also recommended).

Since the zombies only come about two to four at a time, you can thin them out with Squashes and Cherry Bombs while the Chompers are chewing. You can upgrade the Sunflowers if you want, replace the Pumpkins with Wall-nut First Aid and plant Umbrella Leaves in the empty column.

This strategy is very simple. You will need:

Start planting your Sunflowers to the far left and by the time the second zombie comes (the first one should be killed by the garden rake), plant a Fume-shroom and wake it up with a Coffee Bean. Until your Fume-shroom recharges, plant Wall-nuts on the lanes that are not protected. Once you have one Fume-shroom on every lane, make sure to plant Wall-nuts (or Tall-nuts, if you want but Wall-nuts are cheaper) to defend hem. Once that is done, upgrade your Fume-shrooms into Gloom-shrooms. WARNING! Do NOT plant Pumpkins on your Wall-nuts. The fumes from the Gloom-shrooms will not be able to hit the zombies because the Pumpkin makes them farther away from the Gloom-shroom.

This strategy lets you plant many Peashooting plants due to the massive amount of sun you get from it. Best to play on Quick Play or replaying 5-1.

It's helpful but optional to get Gatling Peas, Umbrella Leaf and Pumpkin

Start by planting Sunflowers in the Flower Pots. Once that is done or you have enough sun, plant Repeaters in the column behind the flat surface of the roof. If zombies come close, use Squash. After planting the Repeaters, try to upgrade them into Gatling Peas while planting Torchwood in the column in front.

Plant Snow Peas in front of those and plant Tall-nuts with Pumpkins in the remaining columns. Leave the far right column empty. For the empty spaces behind the Repeaters and in front of the Sunflowers, plant more Sunflowers. Be sure to upgrade them into Twin Sunflowers. You might get the Sunny Days achievement, too.

This gives you lots of sun and you don't need to worry about Bungee Zombies, play it on level 5-1 or the first level of quick play. This can also be easily done on the IOS versions even though they only have nine seed slots.

(Its also a good idea to have the Garden Rake and or the Roof Cleaners.)

First plant 3 Sunflower and when the first zombie appears plant a Flower Pot with a Potato Mine where the Zombie is but 4 squares away to the left, start planting Peashooters on the same column as the Potato Mine but on different rows (Preferably the ones that have a Zombie on.) and when a Conehead Zombie comes either plant a Repeater or put a Pumpkin on a Peashooter. Soon you should have about 300 Sun. Start planting lots of Sunflowers but its not worth upgrading them just yet.

When the second huge wave comes you should get some Bungee Zombies, hopefully, they will go for one of the Sunflowers (That's why I told you to plant a lot of them). If he doesn't then replace the Peashooter, the Pumpkin or the Repeater.

Start adding Twin Sunflowers and replacing the Pumpkins that get eaten by the zombies. It is also a good idea to start adding Tall-nuts or Wall-nuts now. On the Final Wave, lots of zombies will appear. If you have Roof Cleaners on you will probably win. Although you still can win if you don't.

Play until the first flag. Use Fume-shrooms for the zombies because the fumes can pass through shields and roof slant just like catapult plants. When you finish the first flag, go to achievements and you'll get the Grounded achievement.

When There is Conehead Zombie:

Ok, this is super super easy, get 2 rows of sunflowers while using potato mine or squash, use the 6th ad 7th rows to place your peashooters and snow peashooters and place them in pumpkins. Use Umbrella leaves to prevent the overwhelming bungee zombies and then you're done! 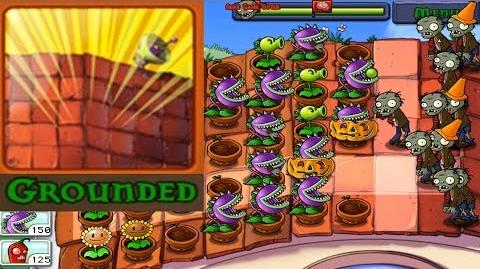