None
It's true what they say, "Never get between a Grizzly Pear and her cub." Doubly true for Zombies.
Grizzly Pear is a triassic uncommon plant card in Plants vs. Zombies Heroes and a member of the

Guardian class. She can also be made by Pear Cub. She costs 5

. She has the Amphibious trait and does not have any abilities.

Her name is a portmanteau of "grizzly bear" and "pear," referring to her appearance.

It's true what they say, "Never get between a Grizzly Pear and her cub." Doubly true for Zombies.

Grizzly Pear has slightly less than average stats for a 5

plant, but she has the Amphibious trait, allowing her to be a powerful plant to guard the aquatic lane for a few turns. But other than that, there isn't really anything remarkable about Grizzly Pear.

If Grizzly Pear is made by Pear Cub, she virtually costs 3

instead of 5. You can use that to your advantage.

While Grizzly Pear is powerful, she is easily destroyable too.

Brainy heroes have instant-kill tricks like Rocket Science and Cut Down to Size which is ideal against her. Cakesplosion and Locust Swarm are also good choices. You can also Bounce this to get some time. Sneaky and Beastly heroes are able to play zombies on the aquatic lane, while Hearty heroes can move Grizzly Pear out of the aquatic lane to make her easier to deal with. 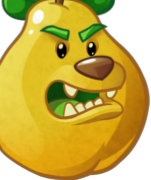 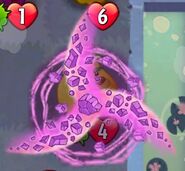 Cut Down to Size being used on Grizzly Pear

Grizzly Pear's statistics after being Conjured by Exploding Fruitcake