Each time you watch an ad, you get closer to earning another Green Screens Theater Blueprint. Use it to level up the building.

Green Screen Theater's special feature is that every few hours you can spin the Spin Reel. This reel will give you a random prize. 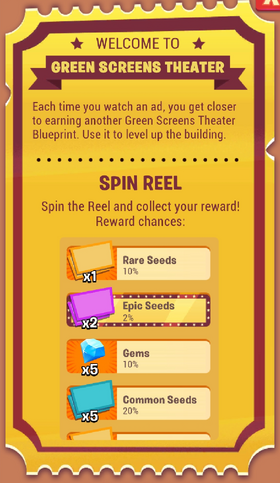 After winning a Breakout Battle the player usually gains seeds. In Green Screens Theater, you are most likely to get the following seeds:

Occasionally during a Breakout Battle a message will appear on the screen signalling a trick. Green Screen Theater's message will say Theater Trick: Wiener Tornado, which will signal the spawning of several Hot Dog Imps randomly on the lawn.

The zombies that are associated with Green Screens Theater are as follows:

Having two Obstacle zombies, it is recommended to bring plants that pierce through multiple zombies into a Green Screens Theater level to avoid them.

Pine Needler is a great choice as she can easily whittle down Donut Roller and his donut while also being able to hit zombies behind Actor Zombies. Snapdragon is a good choice against the Hot Dog Imps, as his range of three lanes ignores the Imp's ability to switch lanes.

Against Cell Phone Zombie, Bamboo Shoots is probably a good choice, as he can do high damage to her. As an alternative, bring any

Earthyplant capable of destroying her.