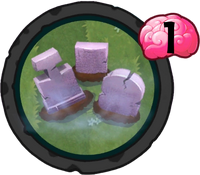 Zombies played here are Gravestones.
When a Zombie is revealed from a Gravestone here, it gets +1

.
Super Brainz always wanted a house with a nice yard.
Graveyard is a galactic uncommon zombie environment card in Plants vs. Zombies Heroes and a member of the

to play, and its ability gives any zombie played in it the Gravestone trait and all zombies that come out of a gravestone in it +1

. The latter ability does not activate on Line Dancing Zombie and Surprise Gargantuar, as they move to another lane before it activates.

Super Brainz always wanted a house with a nice yard.

This environment works well for all sneaky heroes, as whatever zombie you play will be inside a Gravestone immediately. This helps the zombie avoid any plant threats until it is revealed during the Zombie Tricks phase, as well as getting +1

when revealed except Line Dancing Zombie and Surprise Gargantuar. In fact, your opponent cannot know what is inside that gravestone without using Spyris. Even though Grave Buster, Blockbuster, and Grave Mistake can still affect them, each have their own drawbacks. Universally only four can be put into each deck and Grave Buster destroys one, while Blockbuster is expensive and requires a plant for evolution, and Grave Mistake merely bounces it, allowing the zombie to return in the future. Against any opponent without access to spyris/anti-gravestone cards, you can choose to either waste their cards via playing seemingly dangerous yet useless zombies or manipulate them via your play. Still, keep an eye out for Beta-Carrotina/Citron as they lead both classes.

Zombies that benefit greatly from this environment include:

This environment is a bit redundant on zombies that already have the Gravestone trait, as the only benefit that the zombie will get is just +1

. However, this can also trick your opponent, as they will be expecting a zombie without the Gravestone trait to be played there in most cases. A notable example is Ice Pirate, who, despite being a Gravestone zombie, can work well as her ability only activates if she is revealed in an environment.

Headstone Carver can be abused to boost any zombie played in Graveyard if they survive into the tricks phase.

Take note that cards making or transforming zombies, regardless of their allegiance, will also cause zombies to appear in gravestones gravestone, such as Goatify, Evolutionary Leap and Bad Moon Rising. Mixed-Up Gravedigger will also bug and refuse to activate his ability when played here.

This can also be used just to override powerful plant environments like Pair Pearadise and Force Field, due to its cheap cost of 1

This environment is really cheap and allows your opponent to play any zombie in that environment. Not only does it get a small strength boost, but you will not know what zombie is inside the gravestone. In addition, you cannot use damaging tricks or instant kills on the turn that zombie is played.

If all the lanes are filled with Graveyard and all zombies played this turn are in gravestones, using Cool Bean along with Winter Squash can destroy all the gravestones immediately.

But if you really want to know what zombies are played without Spyris, then aim at overriding this environment with one of yours. This strategy is essentially the only choice for Solar Flare, Chompzilla, and Captain Combustible, who all lack ways to deal with gravestones normally. 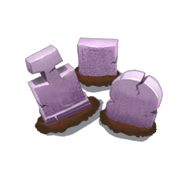 Graveyard on the field

Graveyard activating its ability on Firefighter